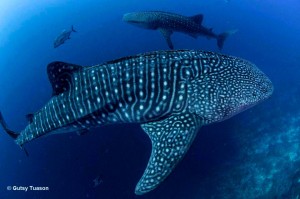 During this year’s diving season, sightings of whale sharks (Rhincodon typus) in Tubbataha have increased for yet unknown reasons. This could be a sign that there is an abundant supply of plankton in Tubbataha, as whale sharks are biological indicators of the presence of plankton and of the overall health of our oceans.

Whale sharks are recognized as the world’s largest cartilaginous fish. They can measure up to 46 feet (14 m) and weigh up to 15 tons. With their enormous size and filter-feeding behavior, they resemble whales rather than the sharks in which class they belong. However, they are not even close to being related to whales. First, whale sharks, as mentioned earlier, are fish while whales are mammals. They have bodies covered with scales, with skeleton made up of cartilage and can swim by moving their tails from side-to-side. In contrast, whales have smooth skin (no scales), with bony skeletons and they move their tails up-and-down when swimming. Whale sharks are cold-blooded and can absorb oxygen from the water through their gills. On the other hand, whales are warm-blooded and use their lungs to breathe as they swim on the water surface.

Whale sharks have also very unmistakable body patterns: dark greyish-blue back and sides, accentuated by light vertical stripes and white dots over the entire body. Distinctive for these marine creatures is an extremely angular head which is depressed, broad and flattened, with a large terminal mouth that can measure up to 1.5 meters across. Remarkably, their mouth contains around 300 rows of tiny teeth, but they are of little use.

These docile animals are a highly migratory, pelagic species distributed throughout the world’s tropical seas. They could be found in coastal waters of subtropical zones and lagoons of coral atolls and reefs such as Tubbataha. They are one of the 13 species of sharks identified in the park.

These gentle marine giants are generally solitary creatures. Because of their calm nature, divers can swim with them with no trouble. However, due also to their passive lifestyle and very limited defences, they have become prone to exploitation for their meat, fins, and oil. Currently, they are listed as Vulnerable (VU) in the IUCN Red List, because their populations are declining in many locations due to unregulated fisheries coupled with their slow reproductive rate. Fortunately, they are now protected by law in the Philippines. Its listing on Appendix II of the Convention on Migratory Species (CMS) has encouraged the formulation and implementation of international conservation and management plans.