The Tubbataha Management Office is the beneficiary a biogas digester, rainwater harvesting system and bio sand water filter after serving as venue and demonstration site for the two-week training on adaptive technologies held by WWF-Philippines on 14-26 September 2015.  The Philippine Center for Water and Sanitation – ITN Foundation conducted the training in collaboration with WWF-Philippines.

A biogas digester is a sealed chamber similar to a septic tank – and can also be used as one. Gas produced by decomposing wastes is captured and used. Biogas is formed when anaerobic organisms that requires no oxygen to grow, feed off the organic wastes that are deposited into the digester. These microorganisms produce methane and carbon dioxide as a metabolic waste product.

The trainees came from Puerto Princesa City and the Municipality of Cagayancillo.  Sessions on the construction, operation and maintenance of the biogas digester and rainwater harvesting system, using a low-cost construction system called ferrocement, were part of the training.

Engr. Apolonio Jimenez and Yunusri Ong of the Philippine Center for Water and Sanitation, a non-government organization with extensive experience in providing technical assistance to communities nationwide in enhancing water supply, sanitation and hygiene (WASH), particularly through the use of ferrocement, facilitated the hands-on training.   Engr. Jimemez explained that households have been found to be one of the major contributors of greenhouse gas emissions and therefor to climate change.   The technology his group brings contributes not only to the elimination of household emissions but generates savings for the household as well.

This rainwater harvesting system was built using ferrocement technology, a system that favors the use of closely spaced mortar and small diameter reinforcements such as wires and mesh, reducing construction cost by 60-70%.

In June this year, marine park rangers reported incidents of coral bleaching in Tubbataha.  The bleaching incident is attributed to the rising sea temperature, which is one of the impacts of climate change. 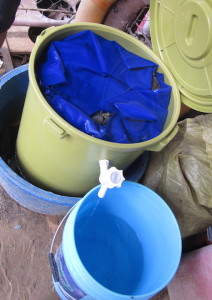 A bio sand filter cleans harvested water so that it is safe for drinking. Collected water goes through a slow filtration process, passing through layers of disinfected sand and gravel. This technology is proven to remove 95-99% of organic contaminants.