Thriving in the warm waters of Tubbataha 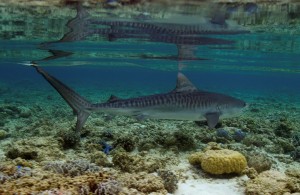 As its name suggests, tiger sharks (Galeocerdo cuvier) have tiger-like stripes which are more visible on the body of its young. As the juveniles mature though, these vertical black lines fade away becoming barely noticeable in adult tiger sharks.

Similar to its terrestrial namesake, tiger sharks are solitary in nature and are voracious hunters. In fact, it has earned the title “Wastebasket of the Ocean” for being an indiscriminate eater. This shark will literally eat anything it will find. Though their regular diet is composed of a wide variety of marine animals, some unique items have been found inside the stomach of captured tiger shark. These include license plates, old tires, pieces of boats and ships, jewelry, clothing and more. They also have powerful jaws filled with serrated teeth that make it so easy for them to crack the shells of sea turtles and clams, and prey on cetaceans.

These huge, blunt-nosed sharks love warm water, hence they are found in tropical and subtropical areas all over the world, including the Tubbataha Reefs. The tiger shark is one of the 13 species of sharks identified in Tubbataha.

According to the International Union for the Conservation of Nature (IUCN), the world’s main authority on the conservation status of wildlife, tiger sharks are “near threatened” as they are continually hunted for their meat, skin and oil. Divers have confirmed the presence of this rare species in Tubbataha.