The Philippines is considered a Biodiversity Hotspot, one of the world’s most biologically rich countries – but also among the most threatened.  Coral reefs are among the most endangered ecosystems on our planet.

Until the 1970s, Tubbataha’s remote location and harsh, sometimes unpredictable, the weather was a natural barrier against exploitation by humans.  But by the 1980s the decline of fisheries in other Philippine waters, especially those close to the shore, pushed fishermen to look to Tubbataha as a source of revenue.  By this time many fishing boats had motors, rather than sails, meaning they no longer relied on wind power and could access the reefs more easily.  During this period larger vessels from China and Taiwan started to fish in the Park.

Many of these fishermen resorted to destructive fishing techniques to maximize catch during their trips to Tubbataha.  They used dynamite to blast reef areas and cyanide solution, a poison that dazes fish and kills corals.  Entire ecosystems collapsed in their wake.

In 2000, financial contributions from the Marine Parks Centre of Japan, Sulu Fund for Marine Conservation Foundation, Inc., Saguda Palawan, Inc., Philippine Navy, and the Provincial Government of Palawan funded the construction of a ranger station on Tubbataha’s North Atoll as well as regular reef patrols.  Since then the continuous presence of park rangers has been invaluable in the battle against illegal fishing.  Still, each year, there are a number of local fishermen apprehended for exploiting Tubbataha’s resources. 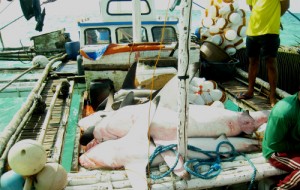 One current problem is that Topshells, the protected shell species Trochus niloticus, are being stolen at night by people entering the park by boat from mainland Palawan.  The Topshells are sold and made into shirt buttons, jewelry and ornaments. Topshells are important to marine ecosystems because they act as natural ‘cleaners’ of corals and serve as food for other marine life.  They filter the sea bottom and help maintain the health of the marine environment.  From 2006 to 2008, there was a striking 80 percent decline in the population of Topshells in Tubbataha.  Night patrols continue to be conducted but the sheer size of the Park (97,030 hectares) makes law enforcement challenging.

In 2007, the first outbreak of crown-of-thorns starfish (COTS) (Acanthaster planci) was observed in Tubbataha.  According to a study conducted in 2010, the Crown-of-thorns in Tubbataha is a native species that propagate in deep water and migrate to shallow water as they grow.  Although the COTS population has slowly declined since 2010, outbreaks need to be continually controlled by manual removal and sodium bisulfate injections. According to the study, similar outbreaks may occur within the next 2 to 4 years. 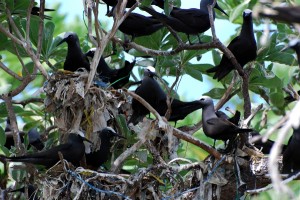 The volume of debris in our oceans increases every year.  Plastic garbage is a threat to marine animals as it is often mistaken for food, which can cause injury or death.  Birds’ nests in Tubbataha are frequently built from plastic food wraps, while abandoned fishing lines made from nylon have caused the death of numerous seabirds.  The Marine Park Rangers conduct regular surface water and coastal cleanups and non-biodegradable garbage is transported to the landfill site in Puerto Princesa City. 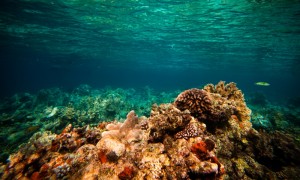 The climate on our planet is changing! Human-induced climate change is perhaps the single biggest threat to the future of Tubbataha.

Under stress, such as increased water temperatures and ocean acidification, corals may expel their zooxanthellae, which leads to a lighter or completely white appearance, termed ‘bleached’. Although it may appear so, when a coral bleaches, it is not dead.  Corals can survive a bleaching event, but they are under stress and are at risk of dying.

The Philippines experienced major bleaching events in 1998 and 2010, the latter affecting 95% of corals. Both were caused by an El Niño weather phenomenon that increased the temperatures in the Indian Ocean and waters of Southeast Asia. In 1998, Tubbataha experienced an 18 percent decline in coral cover and in 2010 by just one percent.

In comparison to other Philippine reefs, the corals of Tubbataha have recovered well from the bleaching events.  Scientists suspect that this is due to the reefs protected status, they can recover from one stress because they do not have to deal with others, such as pollution and fishing.