GMA News Online’s managing editor Yasmin Arquiza received on Sunday an award as one of the champions of Tubbataha Reef for being among the first journalists to write about the problems facing the now-famous marine park.

In the 1990s, when Arquiza began reporting on Tubbataha, it was known mostly to divers and scientists who recognized its natural beauty and ecological value to global fisheries.

Arquiza was then a former reporter with the Associated Press who had relocated to Palawan to focus on environmental journalism.

In a series of investigative reports for the Philippine Center for Investigative Journalism (PCIJ), Arquiza exposed the controversy involving a large-scale seaweed project in the park. Her reports led to the dismantling of the structures being constructed on the reef.

She and several others were recognized during the 25th anniversary celebration of the Tubbataha Reefs Natural Park in Puerto Princesa City, Palawan.

The anniversary marks the establishment of the Tubbataha as a national marine park by President Corazon Aquino in August 1988.

The 25th anniversary of the marine park comes at a trying time for the reef. The Tubbataha Reef Natural Park lost 6,247 square meters of reef from back-to-back groundings by a United States warship and a Chinese fishing vessel in January and April this year, respectively.

In 1994, Arquiza collaborated with marine scientist Alan White and published the first edition of the book “Tales from Tubbataha, Natural history, Resource Use and Conservation of the Tubbataha Reefs, Palawan, Philippines.”

From 1999 to 2006, Arquiza served as an executive committee member representing the Palawan-based environmental group Saguda on the Protected Area Management Board for Tubbataha.

She also ran the Bandillo ng Palawan community newspaper, which published numerous stories about Tubbataha and other environmental issues in the province, from 1993 to 2006. The paper, which was based in Puerto Princesa City, is a Hall of Fame awardee for science and environmental reporting in the Philippine Press Institute’s annual Community Press awards.

In her acceptance speech on Sunday, Arquiza commended the staff of the Tubbataha Management Office and the park rangers who have been “fighting so many threats, from illegal fishers to foreign poachers and even the mighty US Navy, just to protect Tubbataha.”

She also paid tribute to courageous Palawan broadcasters Dong Batul and Gerry Ortega, who were murdered in recent years because of their advocacy against corruption and environmental destruction.

“Like them, let us continue to fight apathy with awareness. Let us fight ignorance with education. Let us fight greed with good governance,” Arquiza said. 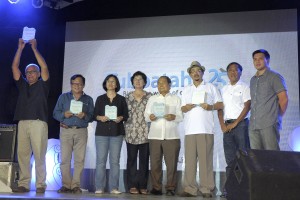 Among the other honorees during Sunday’s program were diver and environmentalist Ernesto “Bebot” Santa Cruz, who was acknowledged as the “Father of Tubbataha.” His letter of concern to government officials about illegal fishing and other threats in Tubbataha had prompted then-President Corazon Aquino to declare the remote coral atolls in the Sulu Sea as a national marine park.

Also recognized as a Tubbataha champion was former Palawan vice governor Arthur Ventura, who made use of the letter from Santa Cruz as the basis of a provincial board resolution requesting the national government to declare Tubbataha as a marine park. In his speech, Ventura recalled that Mrs. Aquino’s son, now President Benigno Aquino III, was at his resort in 1988 and he had asked him to submit the resolution to President Cory.

Former Palawan provincial board member Sammy Umandap was also recognized for initiating an investigation into the railroading of the local government permit that allowed a potentially destructive seaweed farm to operate in the park in the early 1990s.

Former Palawan Governor Salvador Socrates, who was killed in a plane crash in Cagayancillo in 2000, was given a posthumous award for supporting the creation of the Tubbataha PAMB, which crafts park policies until today. The award was given to his son, newly elected Vice Gov. Dennis Socrates.

The Tubbataha management also gave plaques of appreciation to the Naval Forces West, the Coast Guard, and long-time park rangers for taking turns in protecting the park since then-President Fidel Ramos established a permanent station on the reefs in the mid-1990s.

Aside from the awarding of Tubbataha’s champions, a youth congress on reef conservation was also held at the Cory Aquino Park Square to commemorate the anniversary.