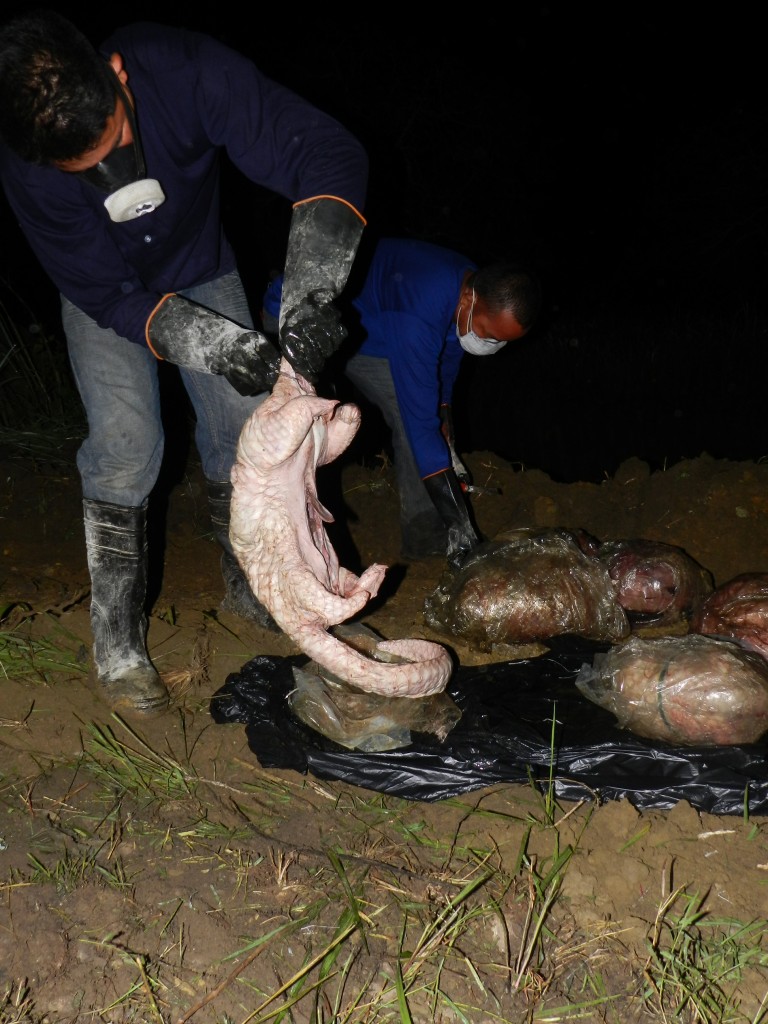 The 2,870 pangolins discovered on board the F/V Min Long Yu have finally been buried. The Chinese fishing vessel ran aground in Tubbataha Reefs Natural Park on 8 April. The burial took place on 27 and 28 April at the Palawan Council for Sustainable Development (PCSD) – Provincial Agricultural Office in Irawan, Puerto Princesa City, Palawan.

Pangolins or scaly anteaters, locally known as balintong are terrestrial animals categorized as Threatened by CITES. They are also protected under the Republic Act 9147 or the Wildlife Protection and Conservation Act of the Philippines.

The hold of F/V Min Long Yu containing sacks of protected species was flooded with water on 26 April.

The Tubbataha Management Office, PCSD, the Department of Environment (DENR) and Natural Resources and Philippine Coast Guard organised the pangolin burial as efficiently as possible but faced a series of challenges.

The F/V Min Long Yu was removed from its grounded position on Tubbataha Reefs on 19 April and arrived at the Puerto Princesa on 20 April. By then the ship’s hold was flooded and the animal carcasses had been soaking in seawater for one week. The disposal team therefore had to consider safety measures.

On 27 April, the liquid waste in the hold was pumped out and transferred to other storage areas on board. It will remain on the ship until results of laboratory tests indicate how it should be safely disposed.

The sacks containing the decomposing pangolins were removed from the hold and packed in bags. They were then brought to Irawan and laid individually in the burial site.

Another factor that delayed the immediate burial of the pangolins was a lack of funds. It cost Php350,000 for a MJJ Steel Fabrication (a local company that worked on the salvage operation of the ex-USS Guardian) to siphon the liquid waste, remove the dead animals from the ship’s hold and transport them to Irawan.

WWF-Philippines President Lory Tan has committed funds from the Presidential Social Fund to pay for this operation. However, while arrival of this funding is pending, the Tubbataha Protected Area Management Board has paid the contractor using part of its 2013 reef conservation budget. They are hoping the committed support will arrive soon, so that conservation activities in Tubbataha will not be disrupted by a lack of funds.