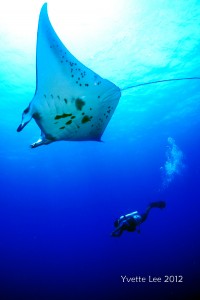 In 2012, using data collected by research volunteer consultant Dr Terry Aquino, marine scientist Dr Will White confirmed that the Manta Rays in Tubbataha are Manta alfredi, a reef based species, rather that Manta birostris, a pelagic species roaming the open seas.

This is exciting, since there was previously no record of Manta alfredi in the Philippines.

The Reef Manta Ray (Manta alfredi) is found in the Pacific, Atlantic and Indian Oceans. However, actual populations seem to be sparsely distributed.

Manta alfredi is considered “vulnerable” on the IUCN Red List Status and an average of 30% decline in its population is suspected. They have a low reproductive rate with females bearing a single pup only once in two to three years.

Mantas are majestic creatures, loved by scuba divers. They are highly sensitive to marine conditions and are therefore an important indicator of the health of the ocean ecosystems.