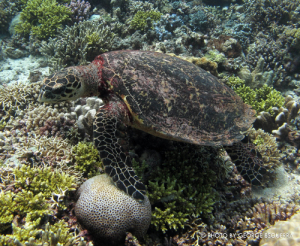 The Hawksbill Sea Turtle (Eretmochelys imbricata), one of seven marine turtle species in the world and one of five in the Philippines, is thriving in Tubbataha!

Named after their beak-like mouth that is used for crushing, biting and tearing off their favorite food – the sponges – Hawksbills are otherwise highly valued for their shells. For centuries, their amber colored carapace (upper shell), with a striking pattern of light and dark streaks and mottled brown-black colors radiating to its sides, were targeted as tortoiseshell material used in jewelry-making, furniture and other ornaments.

In the last century, declines in the global populations of Hawksbills were estimated at more than 80%.  Independent assessments have identified Hawksbills as Critically Endangered. In the Convention on International Trade in Endangered Species of Wild Fauna and Flora (CITES), it is listed in Appendix I and is banned from global trade amongst signatory nations including the Philippines.

In Tubbataha, hawksbills are protected and happy. Divers observe these charismatic marine animals reaching into crevices of coral reefs searching for food and feeding on sponges, algae and marine invertebrates.  In so doing, they free up space for settlement of other organisms such as reef-building corals and support healthy reef growth.