On April 5, during a meeting of the Tubbataha Protected Area Management Board (TPAMB), marine scientists reported that the damage to corals caused by the grounding of US Navy ship USS Guardian measures 2,345.67 square metres.

Dr. Cleto L. Nanola Jr. (UP-Mindanao) led the team of scientists who conducted the final assessment on April 3 to 5. He was joined by US Navy marine biologist Lee Shannon and the Mobile Diving Salvage Unit, marine biologist Miledel Christine C. Quibilan of the University of the Philippines-Marine Science Institute, (UP-MSI), WWF-Philippines and marine park rangers.  The assessment work was supported by the WWF-Philippines, UP National Institute of Physics, De La Salle University and the US Navy.

The initial survey, conducted by the US Navy biologist on January 27 before the USS Guardian shipwreck was salvaged, estimated damage at 4,100 square metres, 1754.33 square metres more than the current measurement.  According to marine scientists, the disparity in figures is due to the methodology used. Using aerial imaging, the grounding zone was originally outlined using the ship’s length as the basis for computing the total damaged area. This image was later observed to be obliquely angled thus artificially expanding the area plotted on mapping software.

The team used three methods – aerial photography, transect tape measurement, and Global Positioning System coordinates along the damage boundary – to derive the official measurement that will now be the basis for computing the financial compensation for the destruction of natural resources in the Tubbataha Reefs.</> 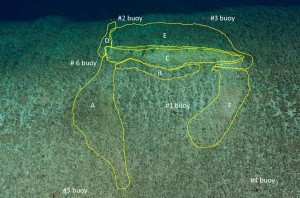 Photo by Lee Shannon /US Navy

In the recent assessment, the reef was closely inspected to determine the boundaries of the damaged area. Six areas were outlined and identified as the coral debris field (A, F) caused by rubble deposited by strong wave action in the rear and forward side of the ship, the salvage operations impact area (B), the mark left by ship’s hull (C), the scoured area caused by the ship’s propeller (D), and the grounding scar from broaching (E). The combined measurement of these areas is final figure agreed up on by the US Navy and the TPAMB.

The TPAMB will contact the US Navy and US Embassy to detail the violations committed in relation to the USS Guardian grounding and expects the payment of PhP58.4 million, USD1.5 million, in fines by the US Government. This amount is the total of the penalties for violating Tubbataha Act (Republic Act 10067) Section 19 (Unauthorized entry), Section 20 (Damages to the reef), Section 21 (Non- payment of conservation fees), Section 26g (Destroying, disturbing resources) and Section 30 (Obstruction of Law Enforcement Officers).

On April 8, a second team of marine scientists from the Automated Rapid Reef Assessment System (ARRAS) Project – a research project funded by the Department of Science and Technology – will visit Tubbataha to do a conduct in depth research on the conditions of the reefs. The team, from UP-MSI, UP Mindanao, De La Salle University, Mapua Institute of Technology and the Department of Environment and Natural Resources will collect data on the grounding area as well as permanent visual records of the damaged reefs, which will serve as reference for coral recovery monitoring. They will also gather comparative data on coral cover inside and outside the grounding area.  The trip is funded by the Bureau of Fisheries and Aquatic Resources (BFAR) and WWF-Philippines.

The seabed in the grounding area is currently dominated by algae but marine scientists are still confident that the reefs will be able to recover. They predict that the presence of herbivore fish feeding on the algae and the proximity of healthy reefs to seed coral larvae will contribute to Tubbataha’s recovery.