Can corals recover from bleaching? 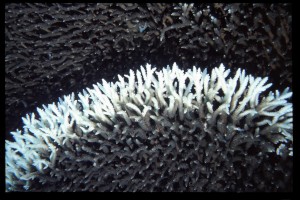 The colourful and diverse coral formations that we see underwater in Tubbataha are actually colonies of hundreds to thousands of individual but genetically identical polyps. Coral polyps are invertebrates, part of a large group of animals called Cnidaria, which also includes jellyfish and sea anemones.

Although corals can use stinging cells on their tentacles to catch small fish or plankton, most get the bulk of their energy and nutrients from zooxanthellae, photosynthetic algae that live within the coral.

Under stress, such as increased water temperatures and ocean acidification, corals may expel their zooxanthellae, which leads to a lighter or completely white appearance, termed ‘bleached’.

Although it may appear so, when a coral bleaches, it is not dead. Corals can survive a bleaching event, but they are under stress and are at risk of dying.

The Philippines experienced major bleaching events in 1998 and 2010, the latter affecting 95% of corals. Both were caused by an El Niño event that increased the temperatures in the Indian Ocean and waters off Southeast Asia.

In comparison to other Philippine reefs, the corals of Tubbataha have recovered well from the bleaching events. Scientists suspect that this is due to the reefs protected status, they can recover from one stress because they do not have to deal with others, such as pollution and fishing.