Can Tubbataha’s reef recover from the USS Guardian grounding? 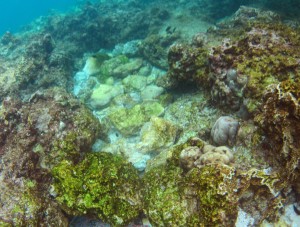 The 4000 square metres of vibrant coral reef, which was turned to rubble by the USS Guardian crash on January 17 2013, is now covered in filamentous algae, which is preventing new coral larvae from colonising the area. (Photo:S.Conales Jr./TMO)

At 2am on January 17 2013, the USS Guardian, a 64-foot US Navy ship, ran aground on Tubbataha’s South Atoll, turning 4,000 square metres of healthy corals into rubble. While authorities remain focused on the $24 million salvage operation to lift the ship off the reef, marine scientists are questioning whether underwater ecosystems can fully recover.

Tubbataha Reefs Natural Park is located at the heart of the ‘coral triangle’, the global centre of marine biodiversity. Tubbataha’s position in the middle of the Sulu Sea means that, for much of the year, it is exposed to the destructive forces of storms and typhoons. Rough seas can damage the reef but this has not prevented the corals from thriving through the years.

In 1999 El Nino, water temperature rise resulted in coral bleaching. Scientific research showed coral cover in Tubbataha has reduced by 17.5% in 1999 but by 2005, it had almost recovered to its original state.

In annual research and monitoring reports on Tubbataha, scientists have suggested that the park’s protected status allows the reefs to recover from natural or climate-related destruction more easily. Since Tubbataha is a carefully managed ‘no-take’ zone with no stress caused by human pressures, the corals regenerate faster than in areas subjected to human pressures such as fishing.

The colourful and diverse coral formations that we see beneath the waters of Tubbataha are actually colonies of hundreds of thousands of individual but genetically identical polyps. Each coral polyp is an individual animal coexisting within a larger colony. These colonies are responsible for the various formations of coral reefs that take millions of years to form. Seventy-two percent of all coral genera in the world are found in Tubbataha.

Research divers surveying the damaged reef have observed that the coral rubble beneath the USS Guardian has been colonized by algae. Most species of algae would help stabilize the coral rubble making the recruitment of coral eggs possible – as corals spawn in nearby areas, larvae in the water can easily stick to the rubble inhabited by algae. During this critical stage, herbivorous fish such as parrotfish, surgeonfish and angelfish would allow coral larvae to grow by preventing the area from being smothered by algae. However, the site damaged by the USS Guardian has been colonised by a species of filamentous algae which is not favoured by herbivorous fish. Without these grazer fish to clean the substrate, coral larvae cannot settle and re-colonization cannot take place.

Although in the past there have been other groundings on Tubbataha Reefs, for example Greenpeace’s Rainbow Warrior II in October 2005, no research has yet been carried out to monitor recovery. According to a report on a ship grounding on Rose Atoll in American Samoa 1993 impacts on algal growth and herbivorous reef-fish populations were still observed over 13 years later.

Only by careful monitoring will we be able to assess the recovery of Tubbataha Reefs after the grounding of the USS Guardian. For now, our priority is to remove the ship from the reef and prevent any further anthropogenic disturbances.

A coral reef is made of thin layers of calcium carbonate. Available from: http://oceanservice.noaa.gov/facts/coralmadeof.html (Accessed: 22 February 2013)

How Do Coral Reefs Form? Available from: http://animals.about.com/od/coralreefs/f/coralreefform.htm (Accessed: 22 February 2013)