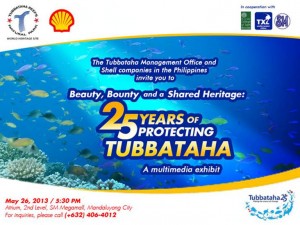 The winners in the It’s More Fun in Tubbataha Video Plug Competition will be announced today, May 26, 5:30pm at the Atrium, Second Level, SM Megamall.

This event is part of the year-round activities celebrating 25 years of conservation in Tubbataha. Dubbed as “Beauty, Bounty, and a Shared Heritage: 25 Years of Protecting Tubbataha”, the program culminates the school-based video plug competition ran by the Tubbataha Management Office in collaboration with the Pilipinas Shell Foundation, Inc., Dela Salle College of St. Benilde and TXL Production.

From the 21 entries submitted in January, six videos made it to the short list. The top six are videos are by Xandrino Mangunay, Jose Mojica, Celina Peñaflorida, Eero Francisco, Jake Soriano and Nikki Mendoza.

Adding to the grand of this event is the launching of the Birds of Tubbataha Exhibit of national artist Benedicto “BenCab” Cabrera and photojournalist Melvyn Calderon. The same art collaboration was installed in Baguio last year, where certain part of the proceeds of the sold artworks was donated for the protection of the Tubbataha Reefs.

Twenty-five years ago, President Corazon Aquino declared Tubbataha Reefs a no-take marine protected area, the first National Marine Park in the country. In 2012, Tubbataha was ranked among the world’s best dive sites and was also recognised by international marine scientists as a model for conservation in the Coral Triangle Region.