Another first in Tubbataha! 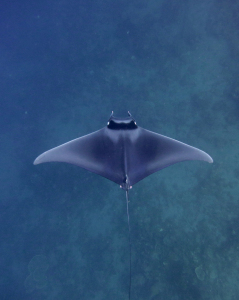 Mobula japanica, also known as spinetail devilray, is usually found close to water surface and may be sighted singly or in small groups, but is not observed forming large schools.* Photo: LAMAVE Project

The International Union for the Conservation of Nature (IUCN), the largest and oldest conservation organization in the world and the leading authority on the environment, has listed the Mobula japanica under the ‘Near Threatened’ category. Although in found in both temperate and tropical seas, very little else is known of this species’ range. They range in size from .85m at birth to about 8m in maturity. Their age of maturity, longevity, reproductive period and other information on biology and life history is very limited. The Mobula japonica keeps its egg inside the mother’s body until it is ready to hatch. It gives birth to a single pup at a time and therefore has low reproductive potential.

The species is vulnerable to gillnets and its gill rakers are used for the Asian medicinal market. Limited information hinders the conduct of a realistic population assessment and current harvest rates but increased catches observed worldwide ‘is cause for great concern and requires urgent international conservation measures as the species is unlikely to be able to tolerate present levels of exploitation’ (http://www.iucnredlist.org/details/41833/0).

Citizen science is making great strides in generating more understanding of the Tubbataha Reefs Natural Park and World Heritage Site. Like Colin, you too can contribute to research in the park. Submit videos and photographs of species or unusual occurrences that you observe while diving in Tubbataha. It may yet be another first!