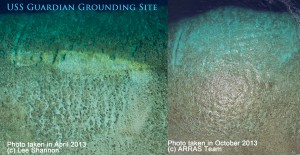 A year after the tragic grounding of the USS Guardian in the Tubbataha Reefs, justice remains unserved.

Exactly a year ago a US warship struck the reefs in South Atoll of the Tubbataha Reefs in the Sulu Sea causing a costly two-month salvage operation. The tragedy left a 2, 345.67 sqm reef area scarred and marred for a long time to come.

The Tubbataha Protected Area Management Board (TPAMB) was been quick in informing the US Embassy, the US Navy and the Philippines’ Department of Foreign Affairs (DFA) of the violations committed against the Tubbataha Law and the corresponding penalties.

For the violation of the Law (RA 10067), the TPAMB is levying a fine of USD1.4M (PhP58.3M) for coral damage and other violations. These include infringement of Section 19 (Unauthorized entry), Section 20 (Damages to the reef), Section 21 (Non- payment of conservation fees), Section 26g (Destroying, disturbing resources) and Section 30 (Obstruction of Law Enforcement Officers) of RA 10067.

However, a petition filed against the US government by other concerned groups has apparently stalled the process. In a letter dated 19 Sep 2013, the DFA said that it would be prudent to wait until the petition on the Writ of Kalikasan is resolved before the claim is pursued to avoid legal and diplomatic issues.

The damaged reefs, a year after the onslaught

The grounding scars left by the USS Guardian are now barely discernible, marine scientists reported after its second assessment trip in October 2013. However, this is not because the corals have grown back, but because algae have completely colonized the damaged area.

The proliferation of algae may have made the scar disappear but the wounds have not fully healed. There is a long wait ahead for the once productive area to recover.

Tubbataha Reefs Natural Park is the largest marine protected area in the Philippines and has been in protection for 25 years. It plays an important role as the major source of fish and coral eggs in the Sulu Sea. Its continued protection contributes to the food security of the nation.