His Serene Highness Prince Albert II, Sovereign Prince of the Principality of Monaco, visited the Tubbataha Reefs Natural Park on 9-11 April 2016 upon the invitation of Ms. Patricia Zobel de Ayala, Honorary Consul of the Philippines to Monaco. Together with Prince Albert II was Mr. Robert Calcagno, CEO of the Oceanographic Museum of Monaco, and his team. 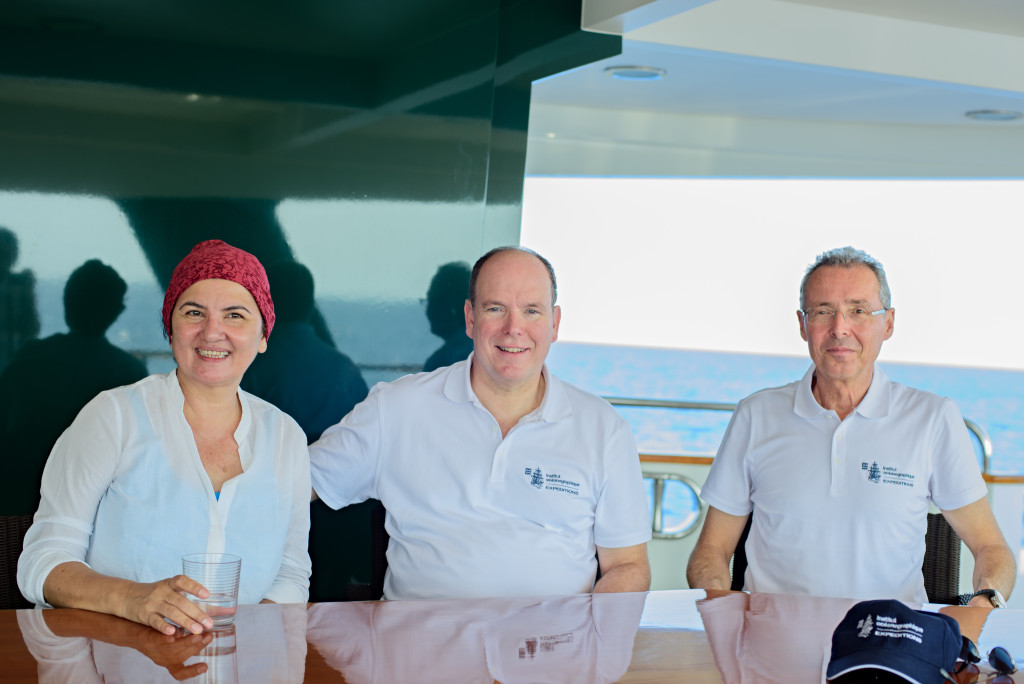 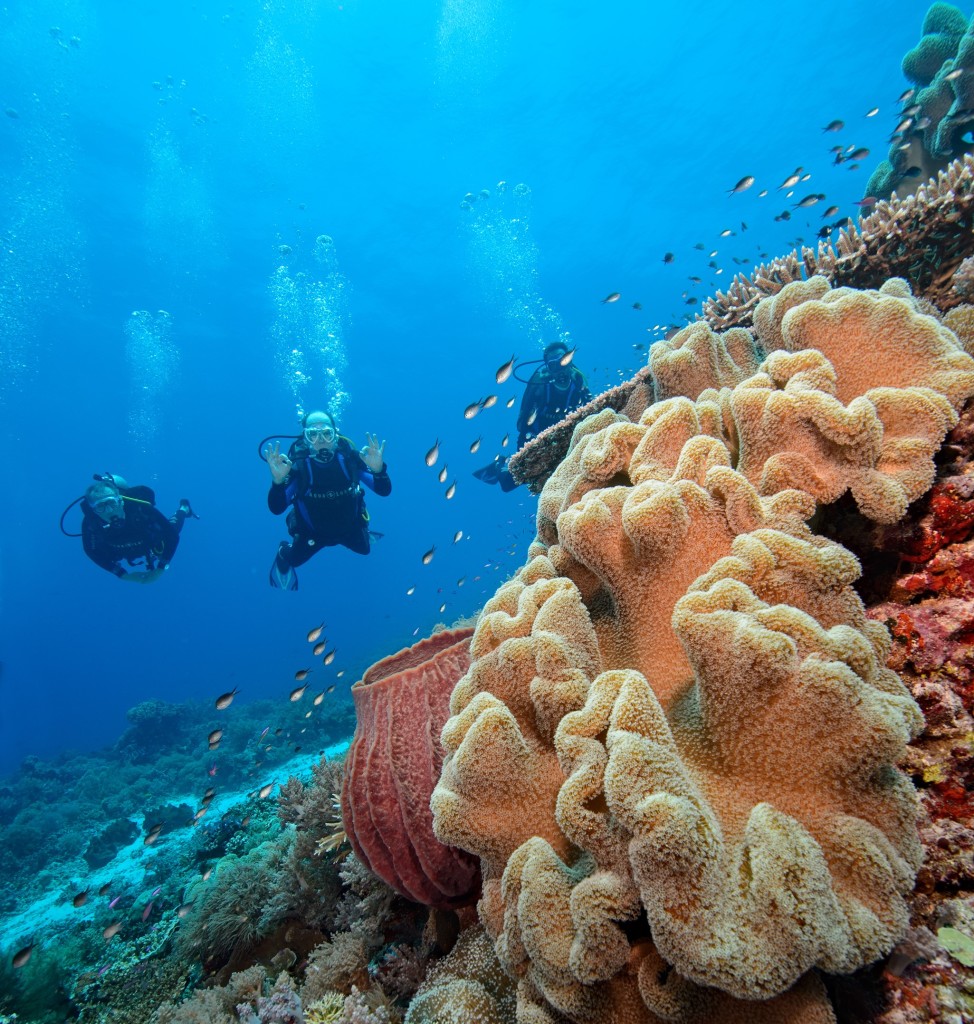 HSH Prince Albert II (middle) gives the OK signal. He is flanked by scuba instructor, Pierre Frolla (left) and Mr. Robert Calcagno. The Prince dived everyday during his visit to the Park. 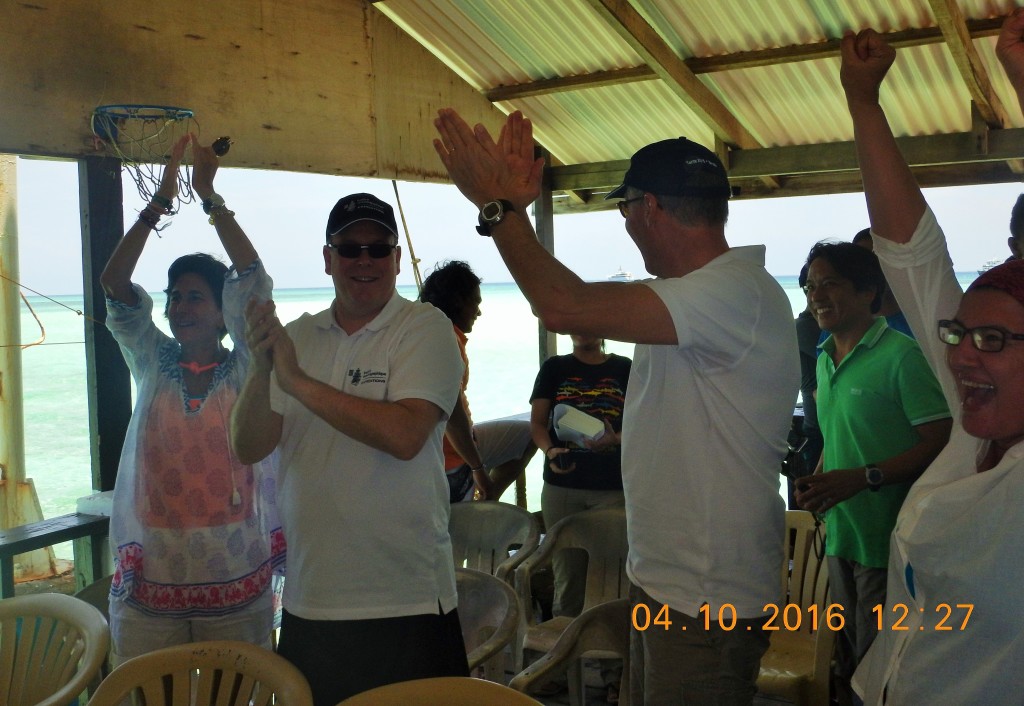 Ms. Patricia Zobel de Ayala, HSH Prince Albert II and Mr. Robert Calcagno cheer with everyone the victory of Manny Pacquiao during his boxing match with Bradley on 10 April 2016. 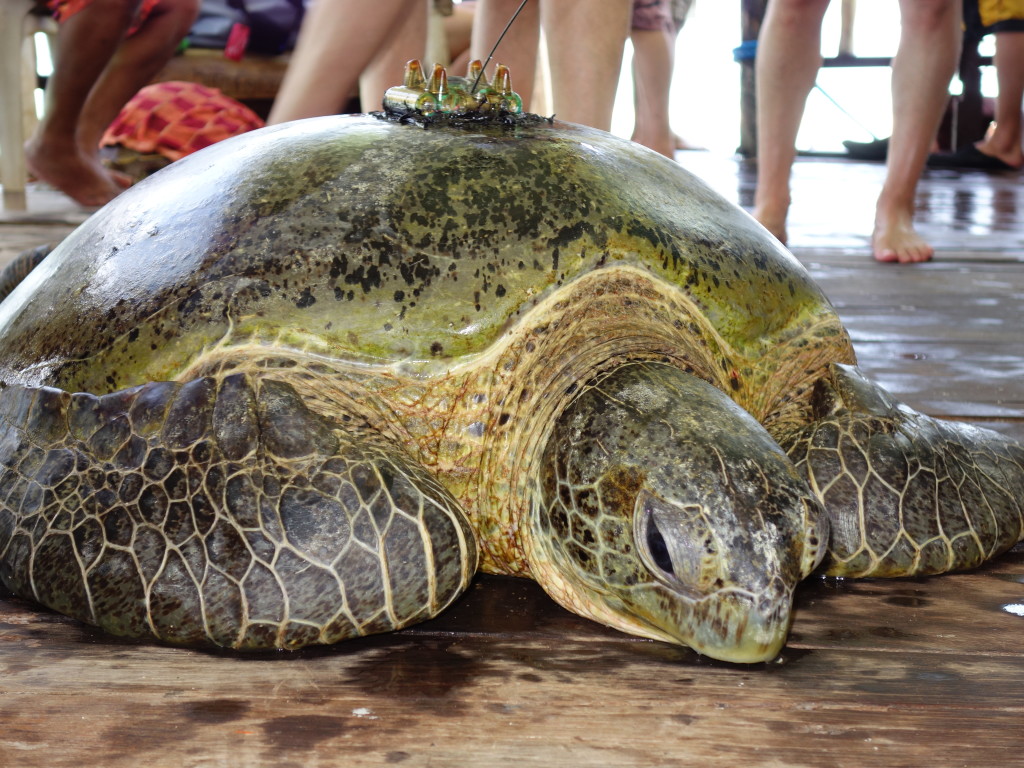 A 96-cm male green sea turtle (Chelonia midas) receives a satellite tag from the Oceanographic Museum of Monaco. He is named Jacques, after the son of HSH. A second turtle, a 53-cm hawksbill (Eretmochelys imbricata) was also tagged with a satellite transceiver. It was named Gabriella, after Jacques’ twin sister. Mr. Calcagno received reports from Monaco the following day that the tags have already transmitted data. 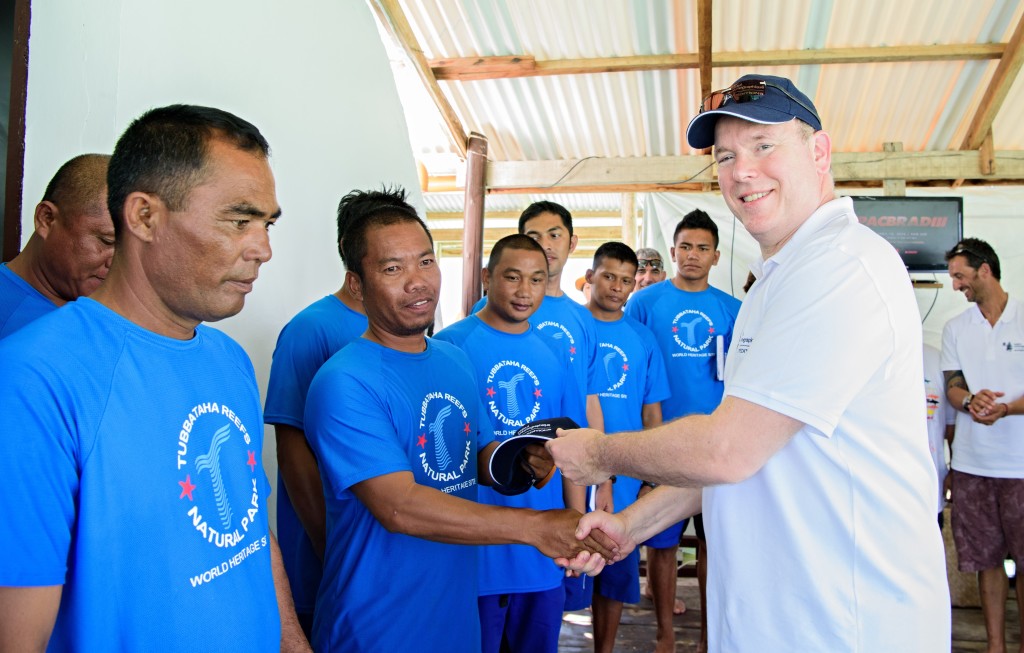 HSH Prince Albert II presents each marine park ranger in Tubbataha with a hat from the Oceanographic Museum of Monaco, a museum of marine sciences which was inaugurated by his great-great grandfather in 1910. 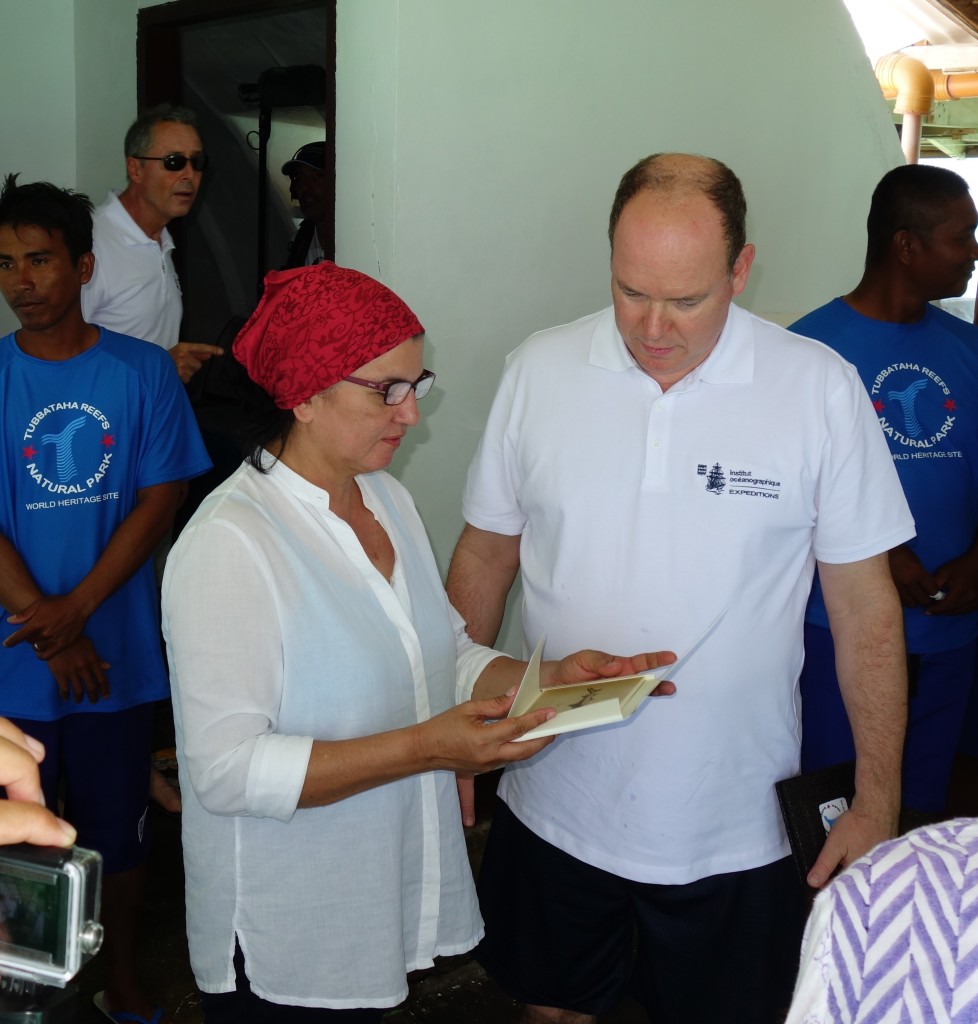 PASu Angelique Songco presents HSH Prince Albert II with postcards on the sharks of Tubbataha. The postcards were designed and donated by TBWA/Santiago Mangada Puno, a multi-awarded ad agency based in Manila. 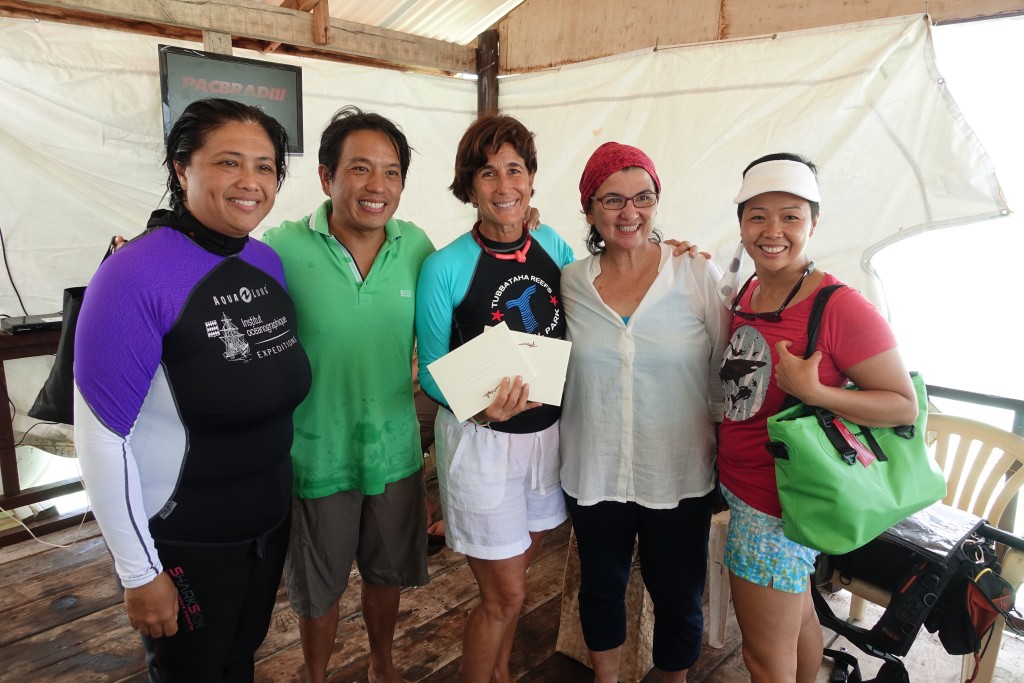 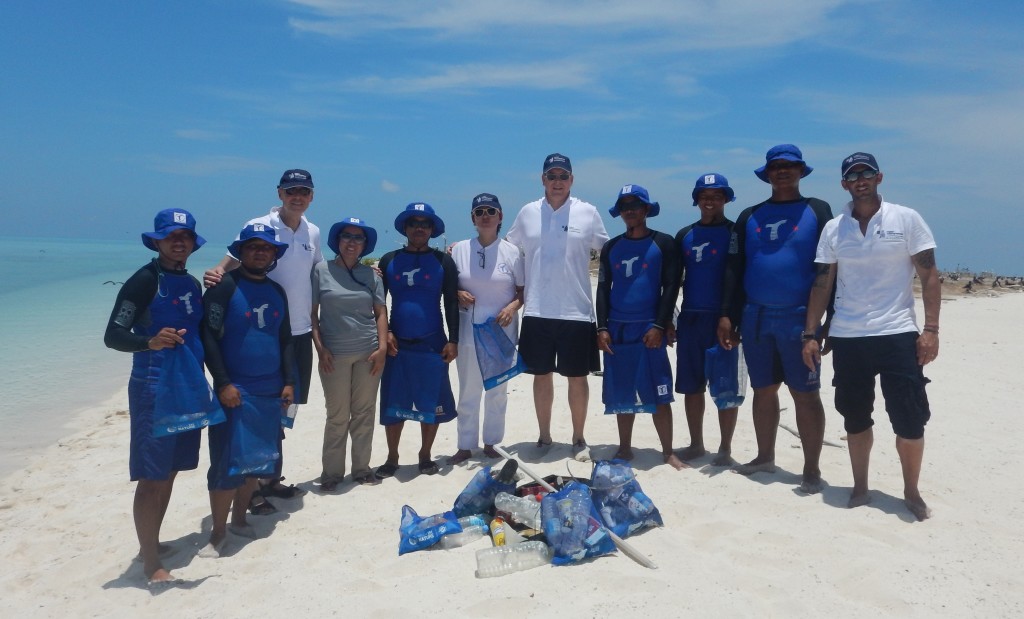 HSH Prince Albert II (7th from left) and Mr. Calcagno (3rd from left) spent almost an hour in the blistering heat on Bird Islet where Tubbataha Research Officer, Ms. Retchie Pagliawan (4th from left), briefed them on the status of seabirds in the Park. The royal guest picked up garbage along the way. He stressed that we need to consume differently if we are to save the ocean and its inhabitants from the negative, and often fatal, impacts of marine debris. 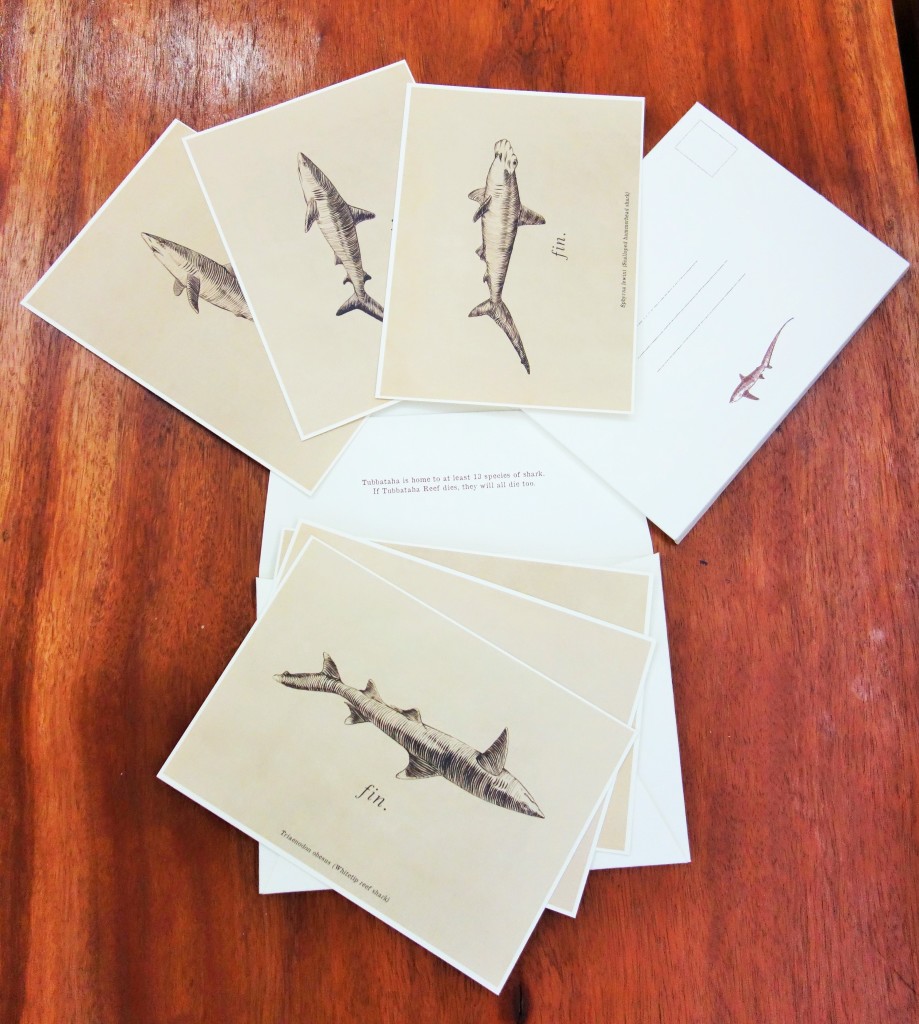 These postcards featuring the endangered sharks of Tubbataha were given as token to HSH Prince Albert II. The shark postcards were designed and donated by the ad agency TBWA/Santiago Mangada Puno.

It was a magical three days for park staff and rangers. The royal visitor was very simple and accommodating, showing sincere interest in the future of Tubbataha. Having travelled 11,000 kms. by land, sea and air to reach the park, HSH Prince Albert II and Mr. Calcagno vowed that it is their intention to contribute to the protection of the Park into the long-term. Discussions as to the concrete terms of involvement of Monaco in Tubbataha are underway.

The Tubbataha Protected Area Management Board is very grateful to Ms. Patricia Zobel de Ayala for inviting the Sovereign Prince of the Principality of Monaco to Tubbataha, thereby generating support for its conservation in Europe.