Seabirds spend their entire life in the open ocean, using pelagic islands and islets as breeding sites and for raising their young.  Although they have longer life spans, seabirds breed much slower and have fewer chicks than other birds.  They are biological indicators of the health of the ocean.

The Tubbataha Management Office monitors seabird populations monthly and quarterly using various methods.  An annual survey on the second week of May each year combines all survey methods to come up with a more accurate estimate of numbers.  This year the survey was conducted from 9 to 14 May 2016.   Here is what happened those four days… 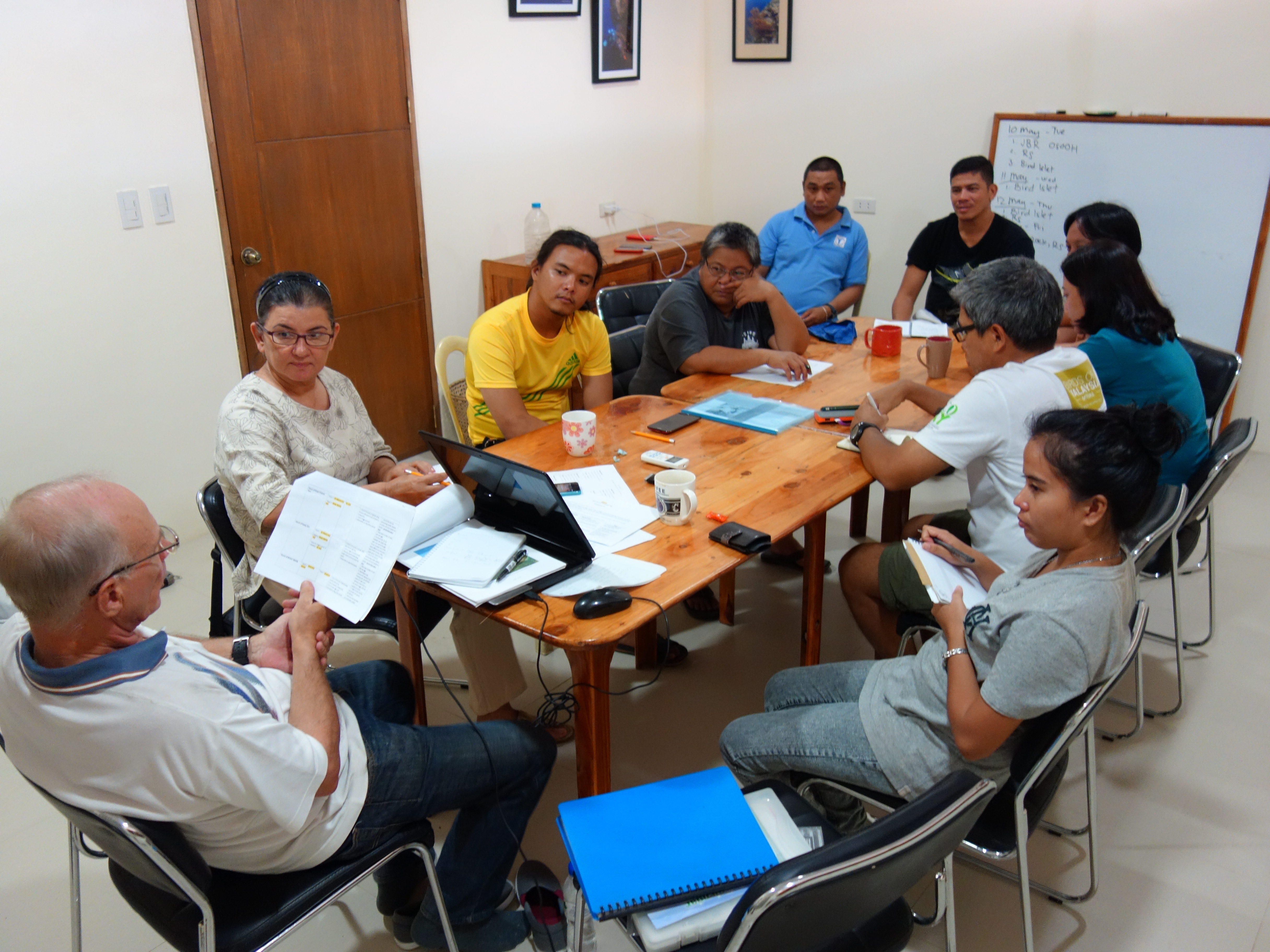 A pre-departure briefing was held at TMO to review progress on recommendations fromt he year before, discuss the itinerary, tasks, and other last minute requirements. Seabird consultant, Arne Jensen, pulls out his 2015 record and takes TMO to task. Photo by: Rowell Alarcon 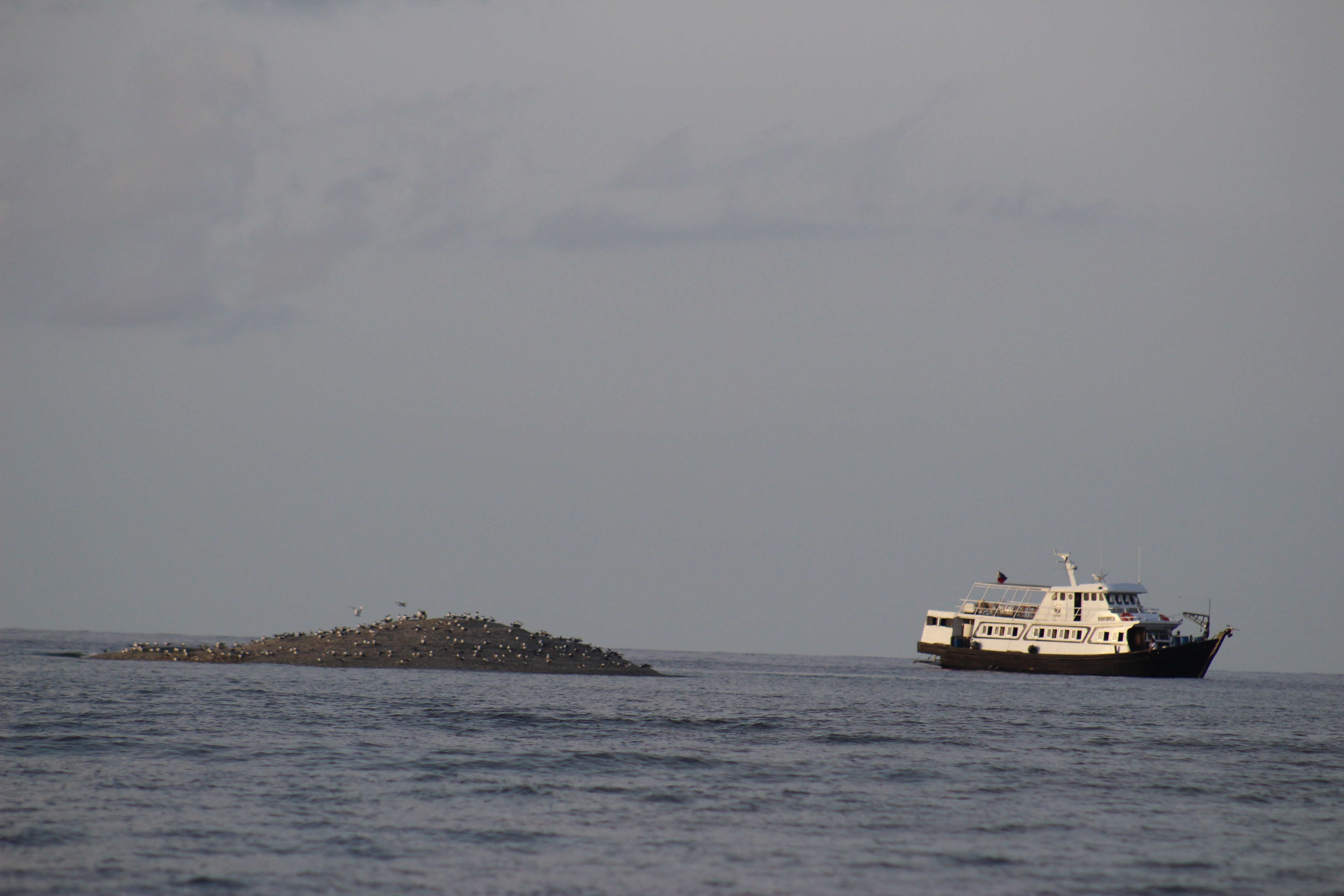 First stop: Jessie Beazley Reef. On 10 May, WWF research vessel, M/V Navorca, pauses to allow researchers to count seabirds roosting in a cay made up of broken corals. Over 500 seabirds were observed resting in this area. Photo by: JC Gonzalez 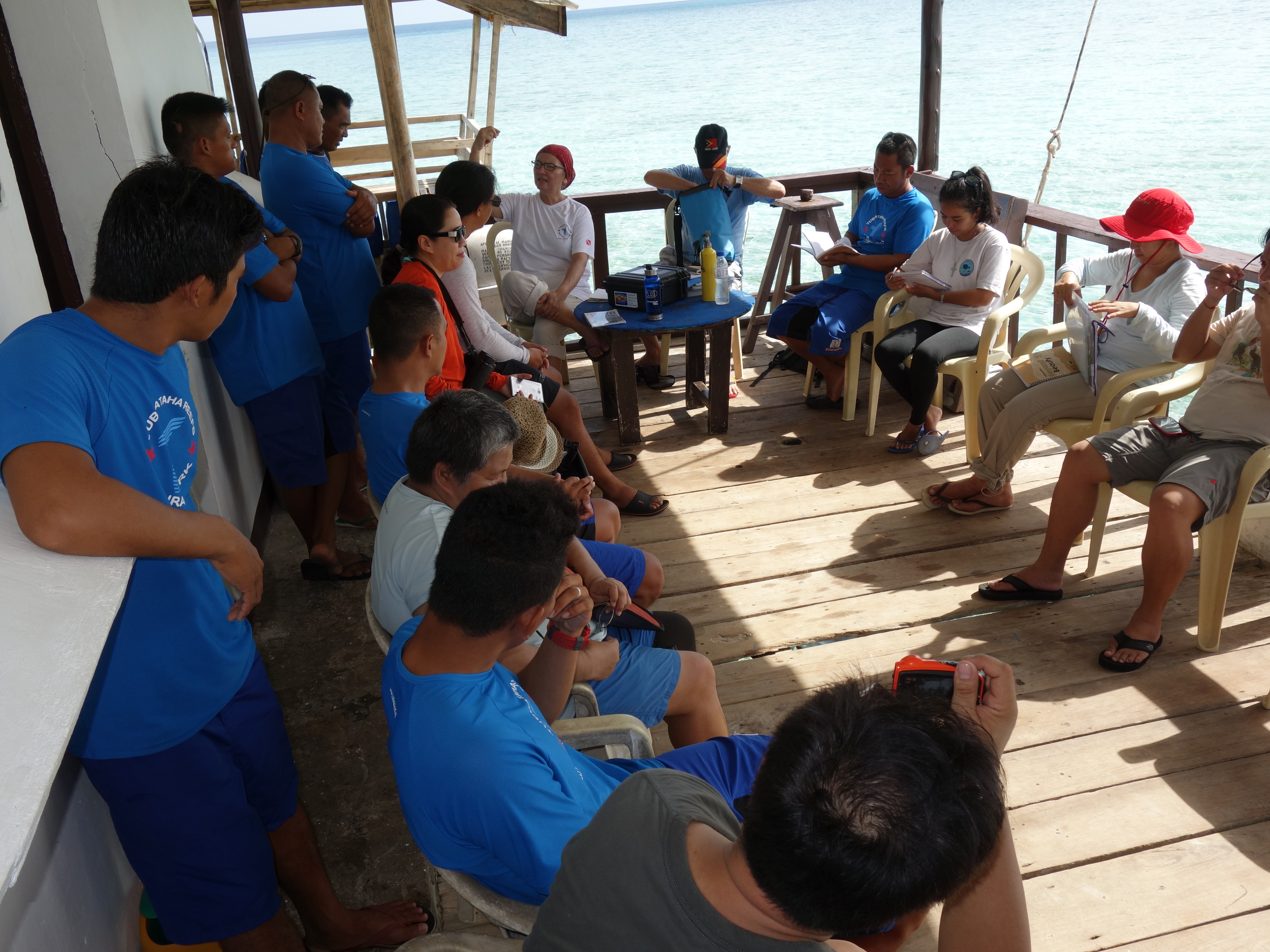 A briefing is held at the ranger station to inform marine park rangers of the mission and their role in it. Photo by: Rowell Alarcon 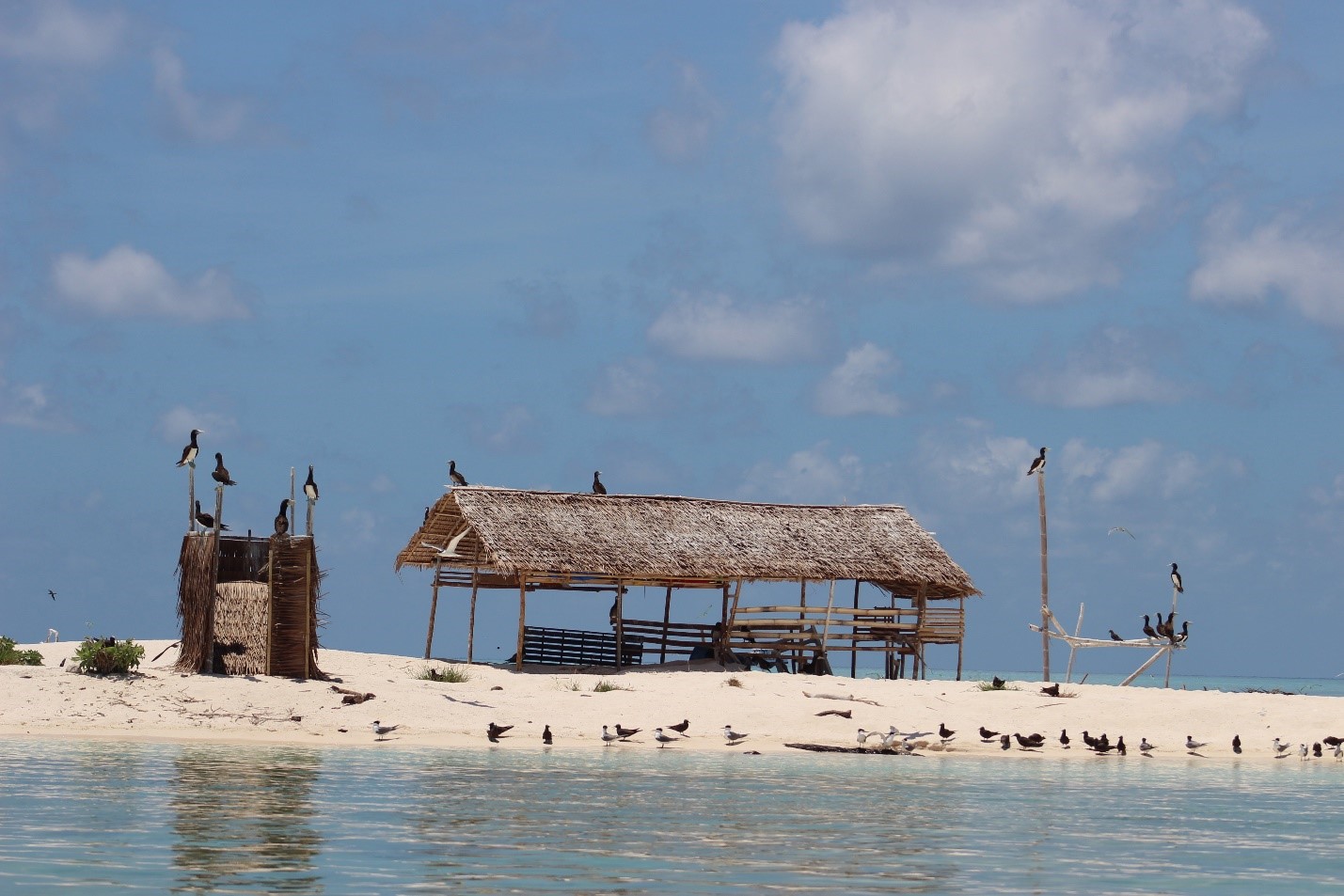 Marine park rangers erected the ‘Bird Islet Regency’, home of researchers for two and a half days. To the left is the ladies’ bathroom, first used by brown boobies (Sula leucogaster) to roost. Photo by: JC Gonzalez 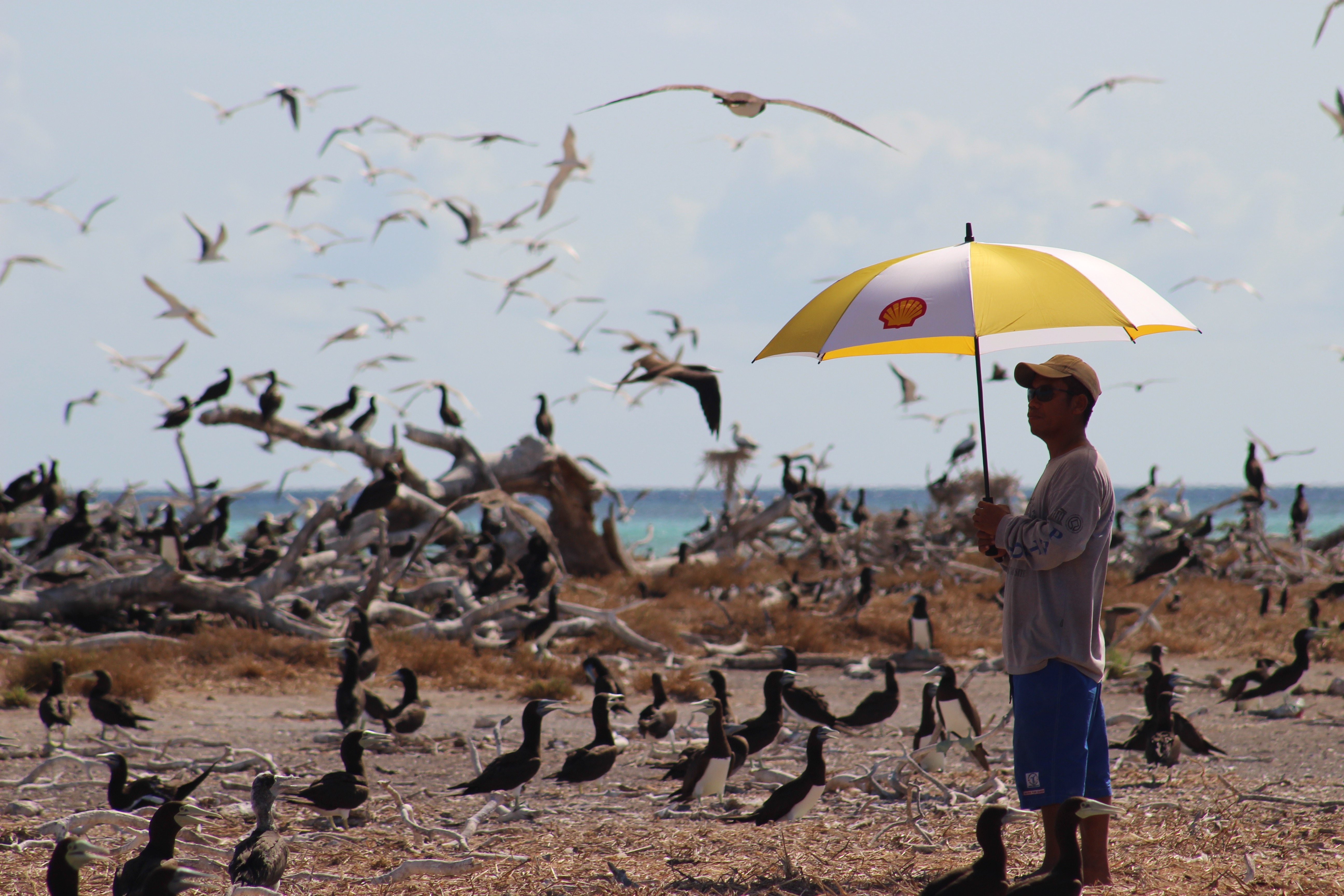 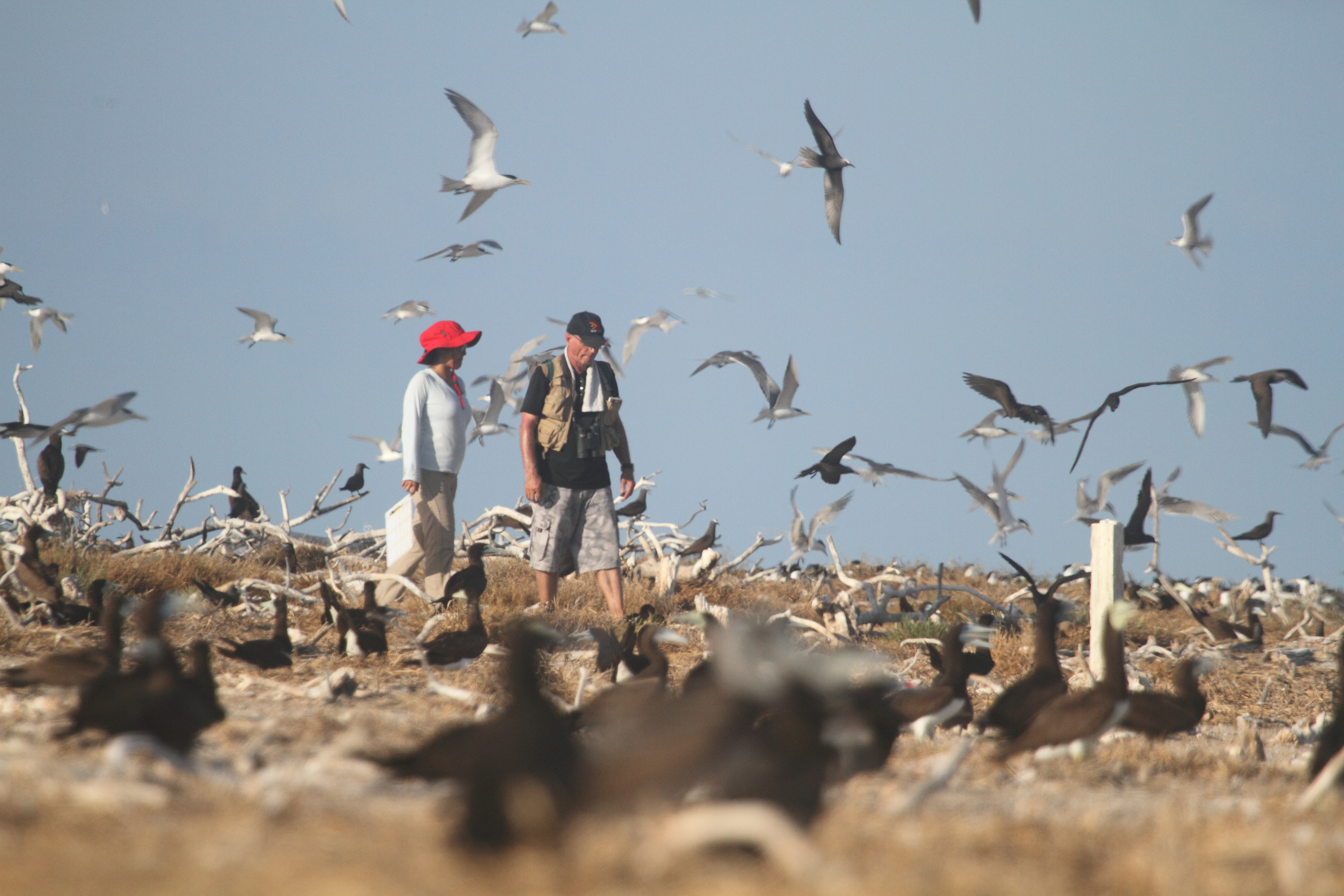 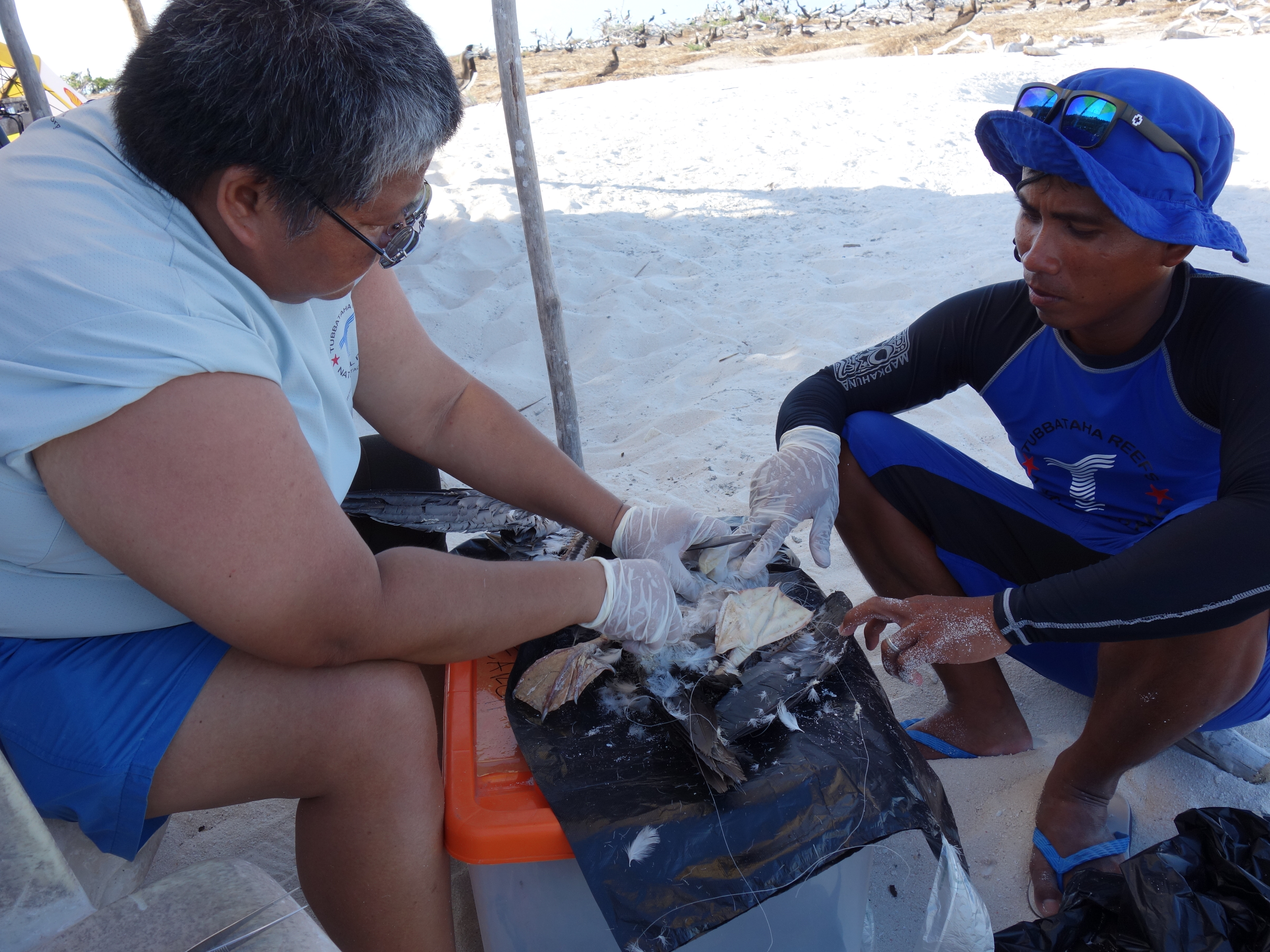 Dr. Teri Aquino, D.V.M. is assisted by park ranger, Narciso Cayao, in the necropsy of a red-footed booby that died due to entanglement in a fishing line. Twenty percent of the necropsies suggested that severe heat stroke was the cause of death. Photo by: Rowell Alarcon 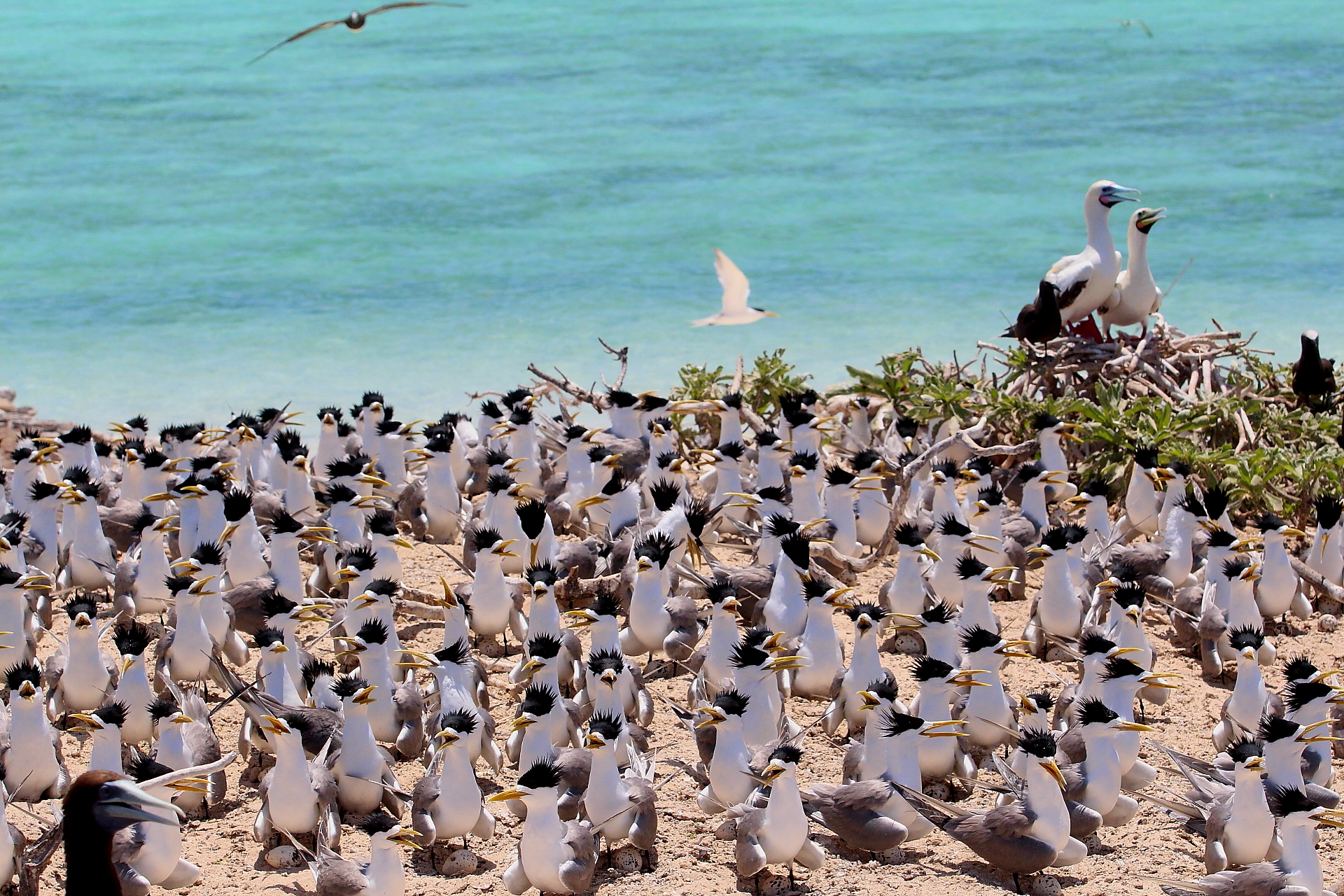 Great crested terns (Thalasseus bergii) by the thousands lay eggs in colonies. On the upper right hand is a pair of red-footed boobies (Sula sula) tending their nest. On the foreground, lower left, is a brown bobby. Photo by: Godfrey Jakosalem 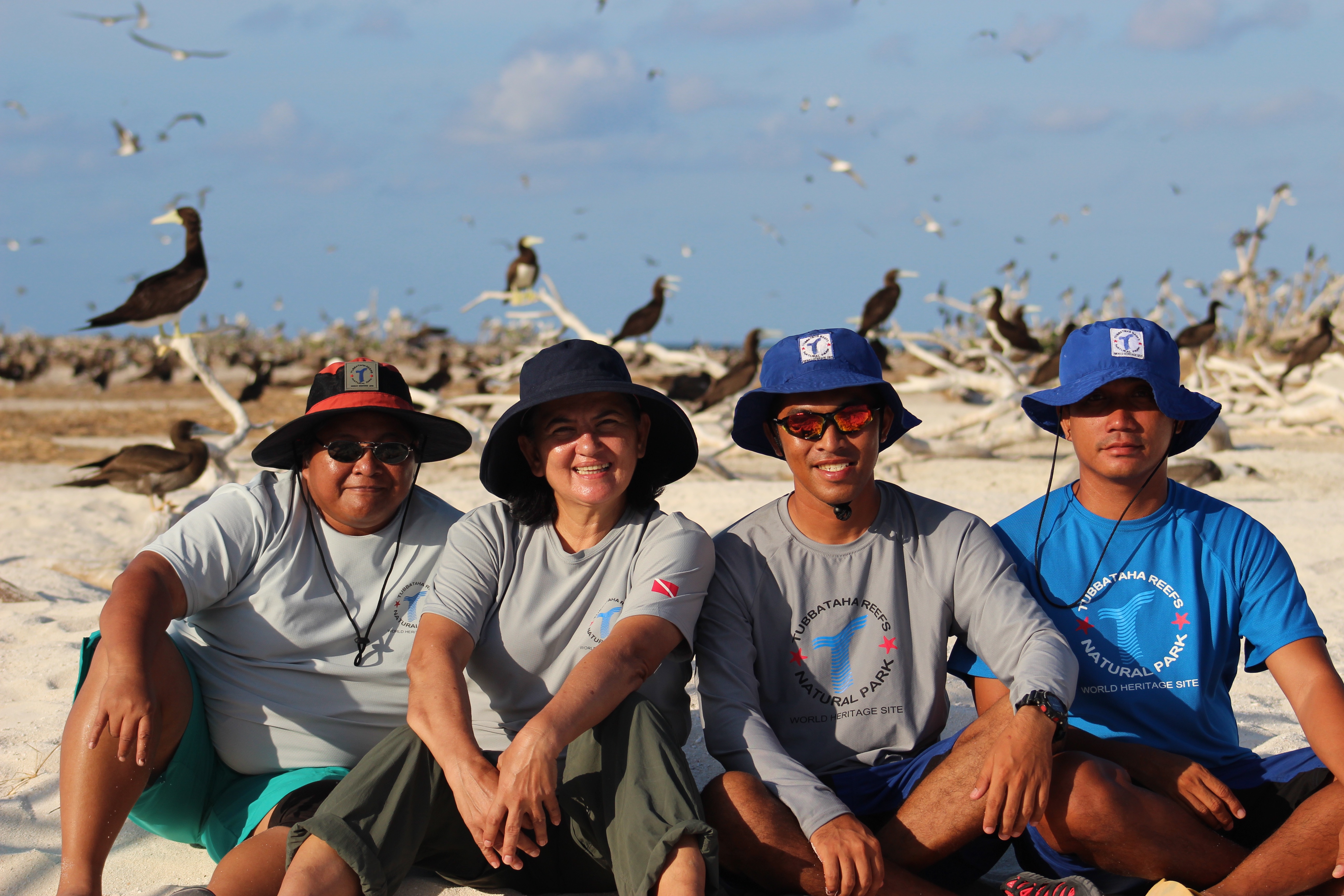 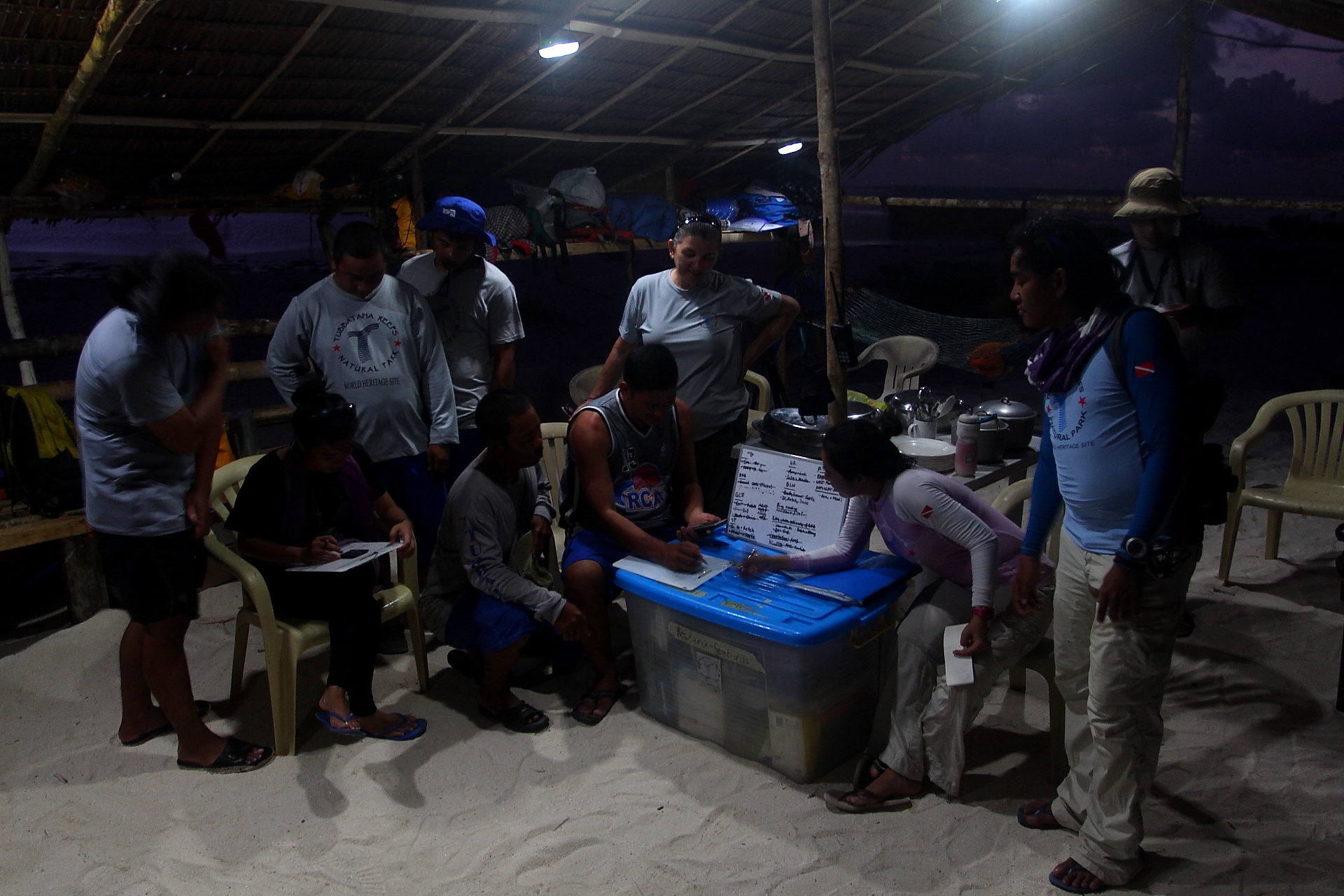 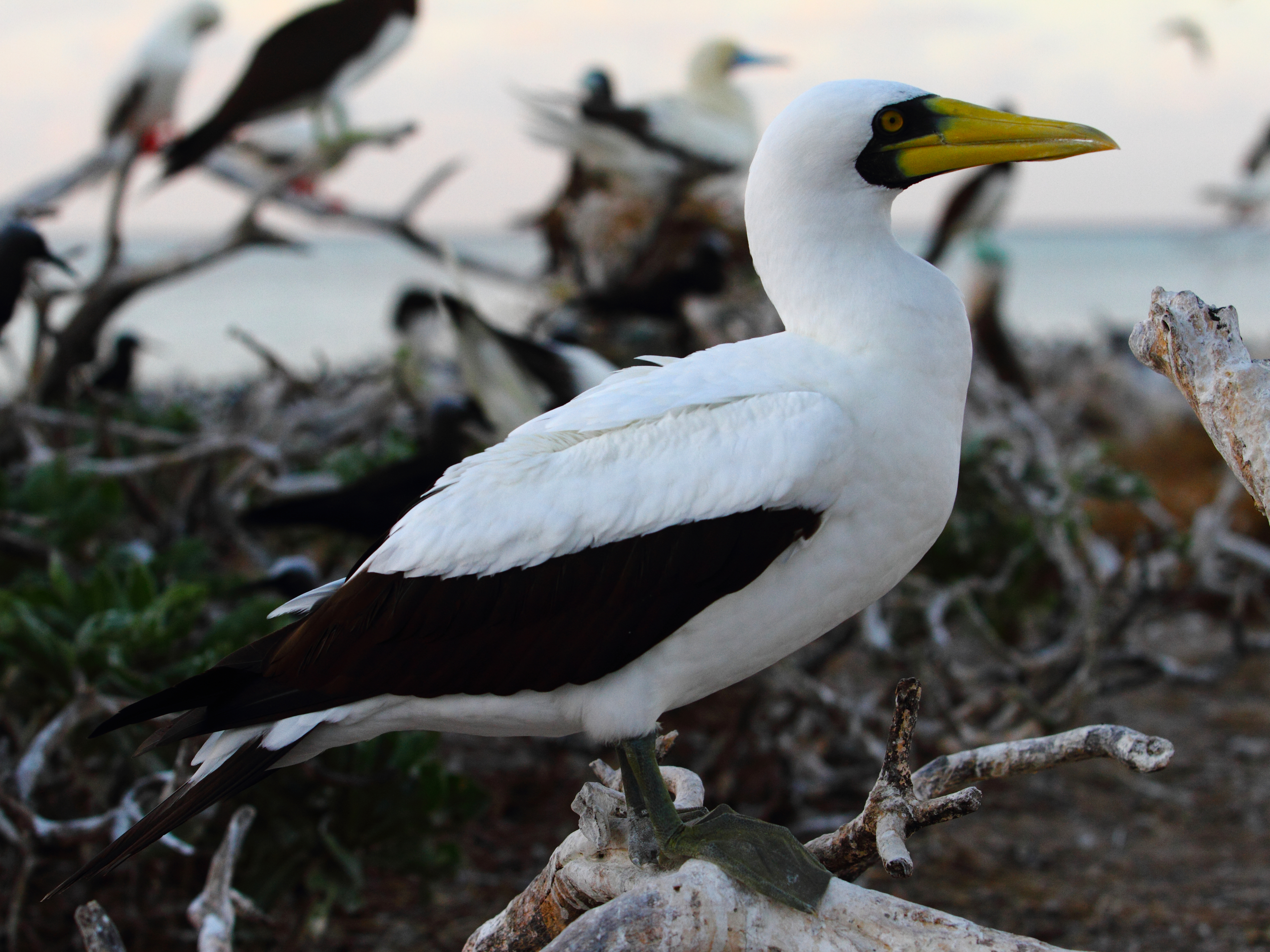 Absent since 1995, a lone masked booby (Sula dactylatra), believed to be male, made a surprise appearance early morning of 11 May at the Bird Islet. It is uncertain whether it will stay in the Islet or fly away once again. Photo by: Godfrey Jakosalem 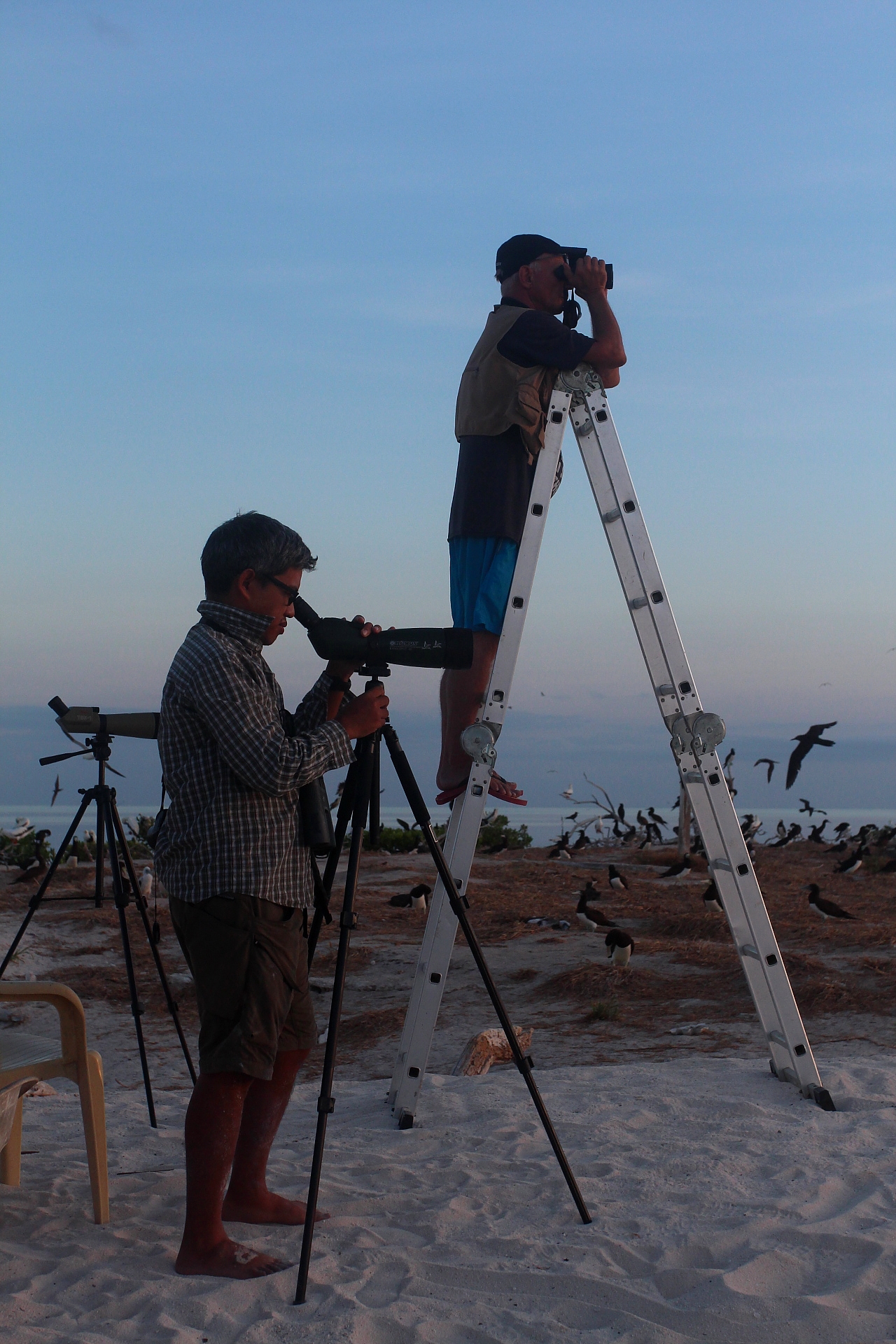 Volunteer Amado Bajarias, Jr., of Wild Bird Club of the Philippines, peeks through a spotter’s scope. Arne Jensen, on ladder, scrutinizes the islet with his binoculars for any birds that might have escaped his eagle eyes. Photo by: Godfrey Jakosalem 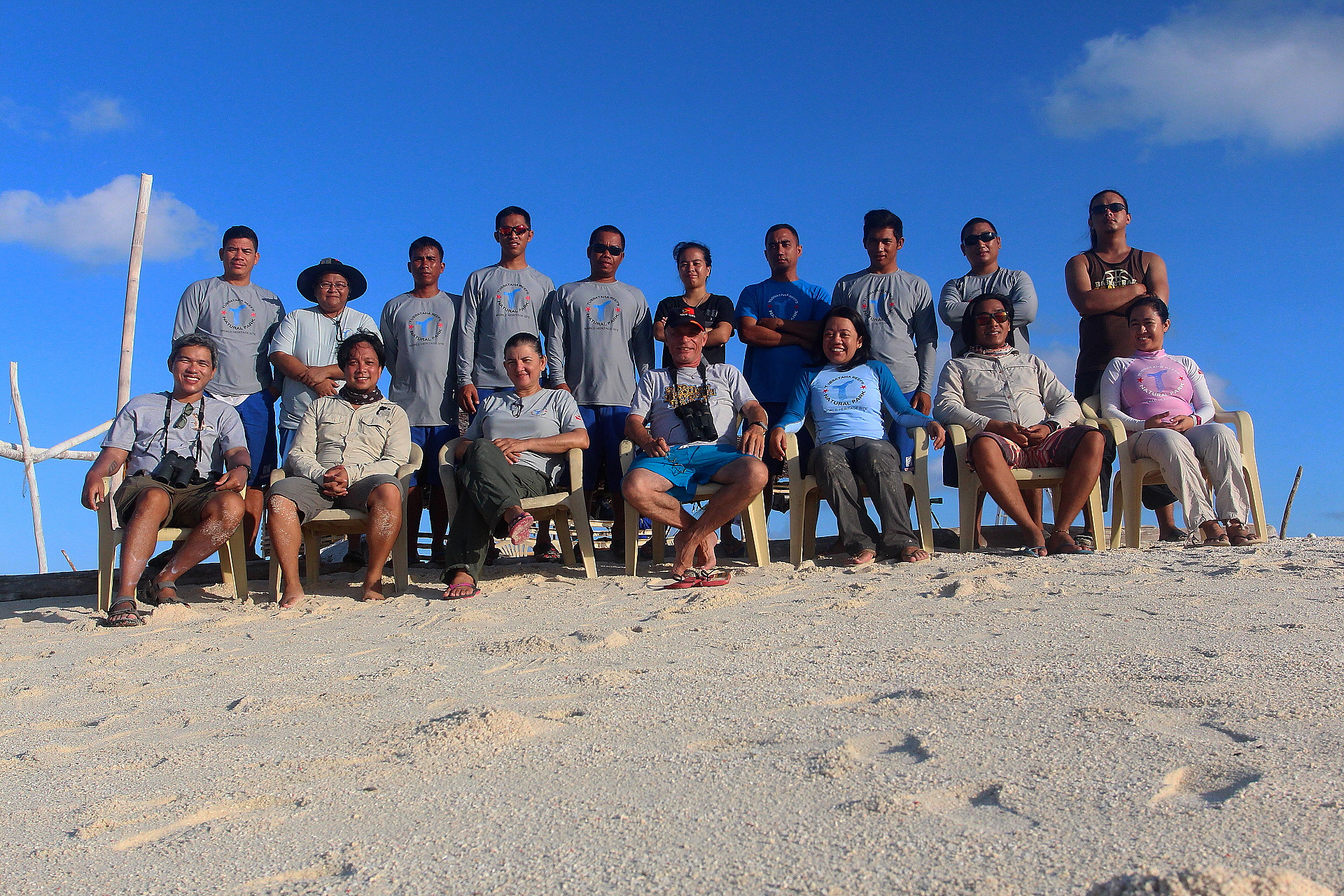 It was a great effort to get the 2016 seabird research team together for a family picture as everyone had assignments to finish. When finally, a photo could be taken, an esteemed member of the team, ornithologist Dr. JC Gonzales, was nowhere to be found. Hence a second photo, below, had to be taken. Photo by: Godfrey Jakosalem 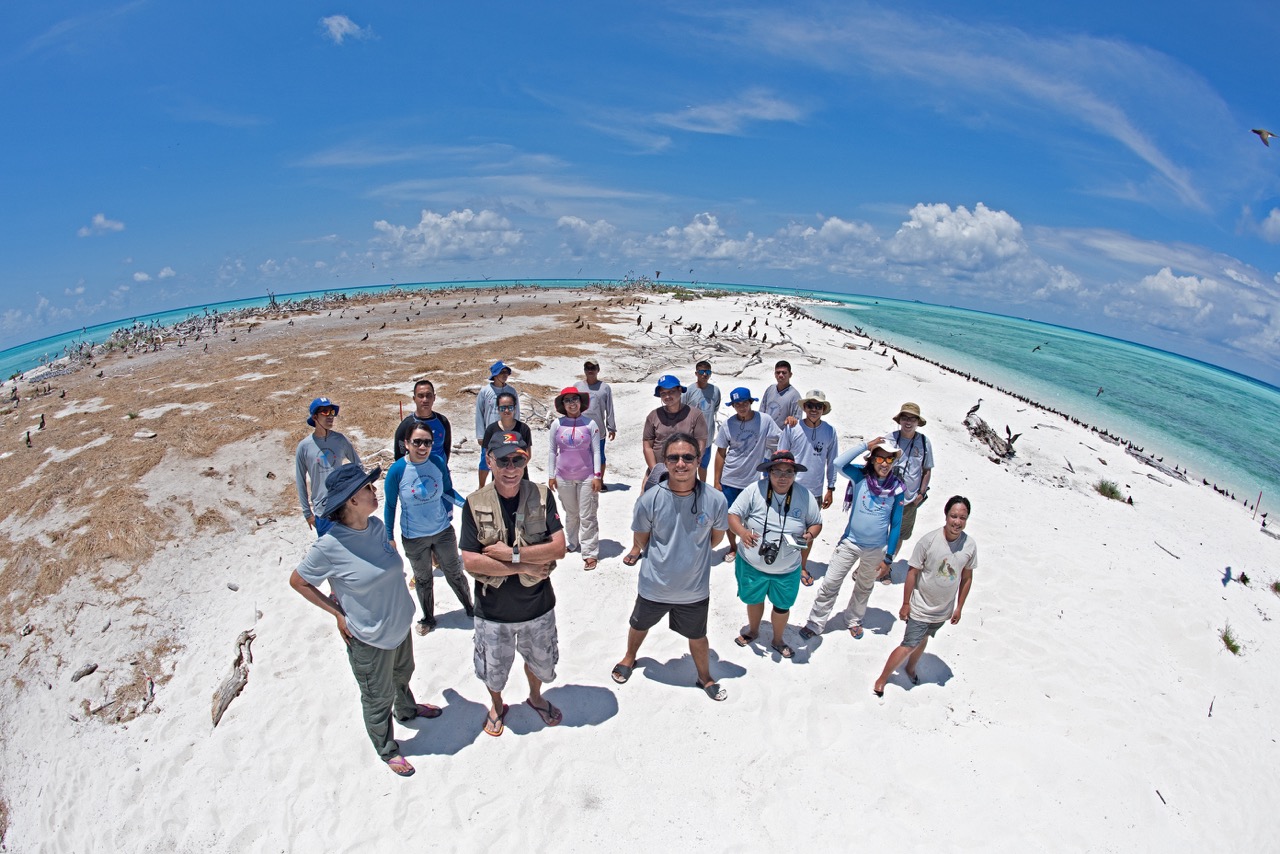 The 2016 seabird research team photographed in the noontime heat on 11 May. The Plaza, the brown patch in the center of the Islet, is almost empty of seabirds. During daytime, only about half of the seabird populations are present in the islet while the other half are off hunting. Photo by: Tet Lara 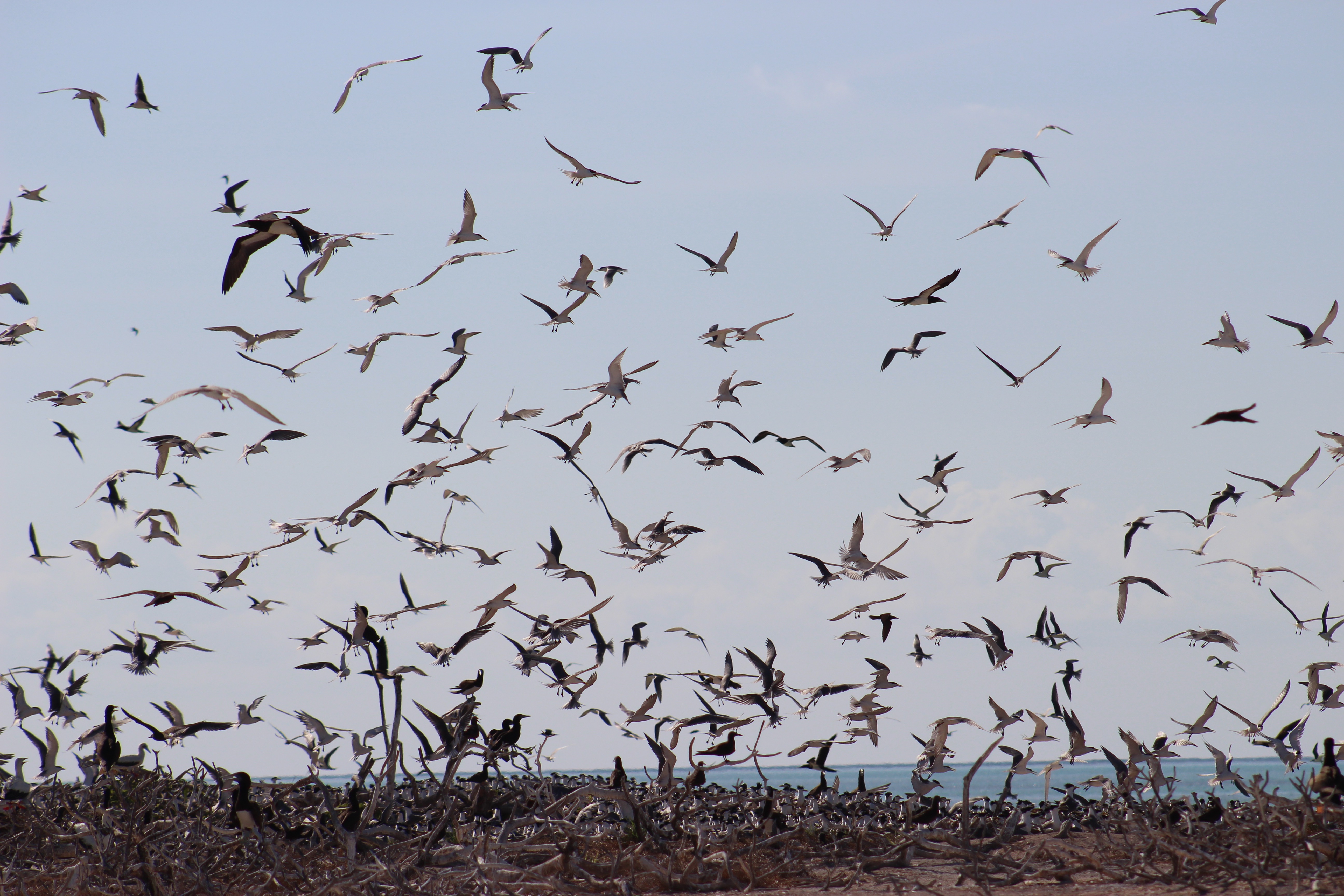 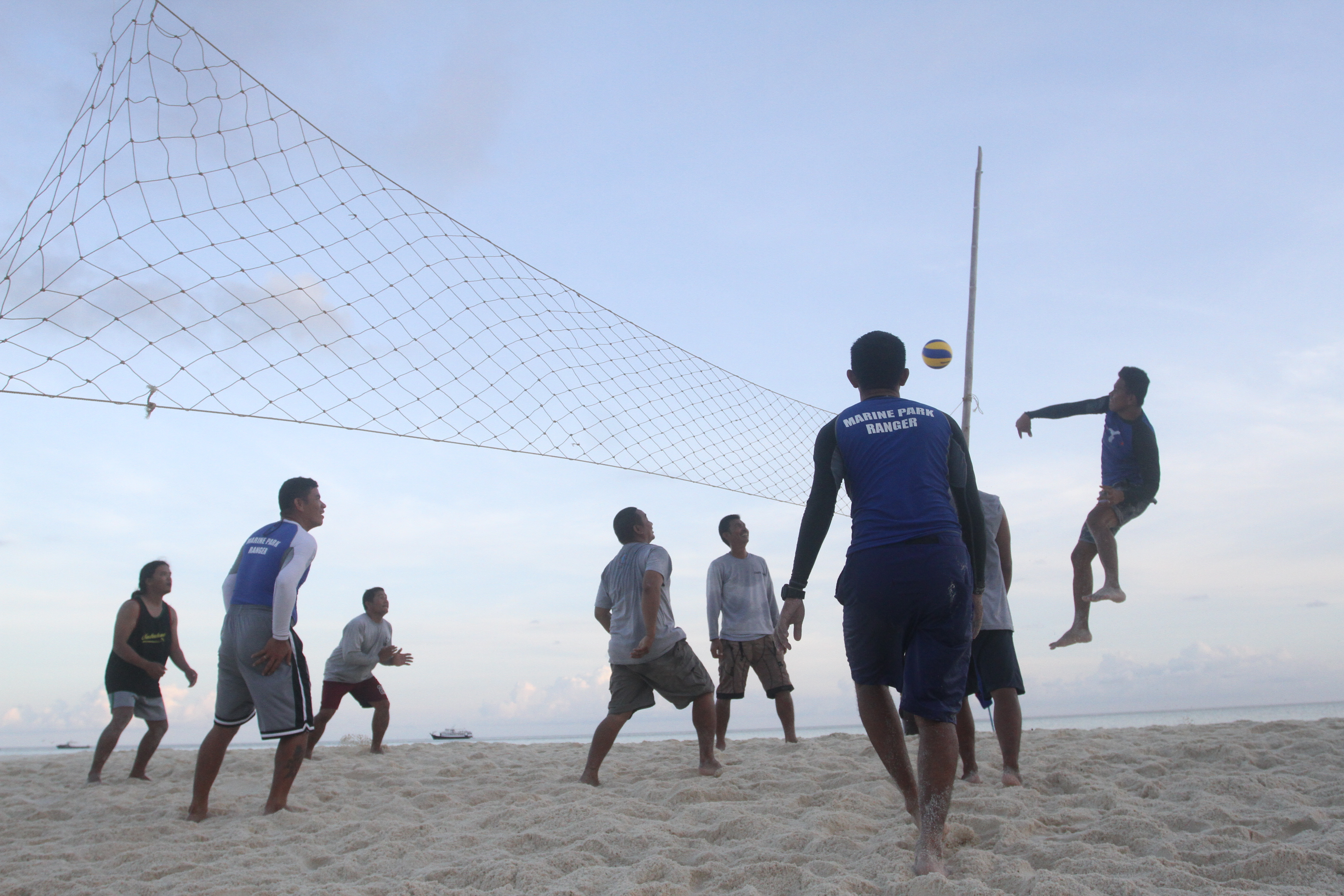 After two and a half days in the Bird Islet, everyone is looking forward to more fun. On 12 May, the much-anticipated volleyball match between M/V Navorca crew, headed by Captain Ronald de Roa, and its passengers, against marine park rangers is held. Eric Flores (PN) shows off his winning form. Photo by: Godfrey Jakosalem 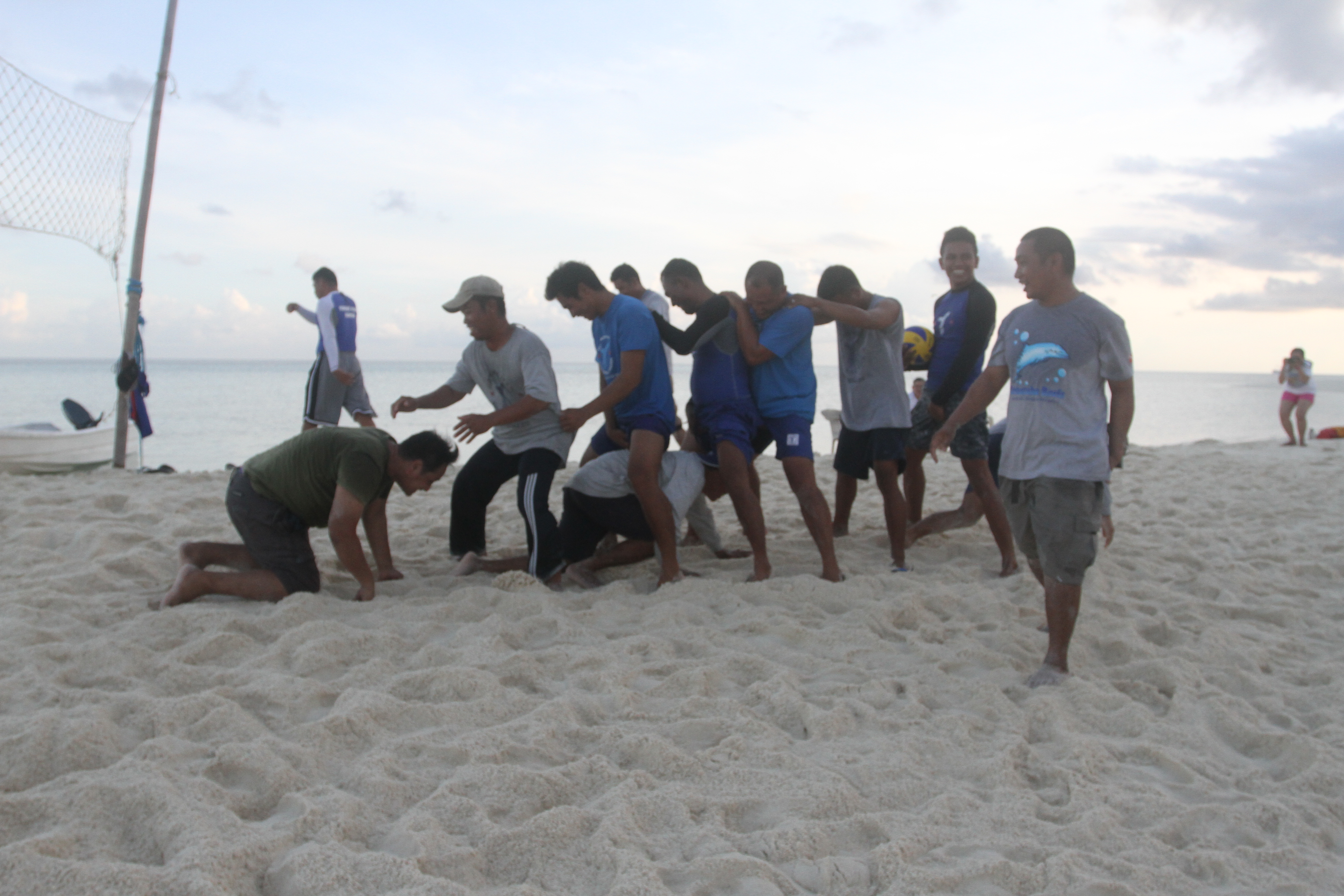 Loss in a match is punishable by humiliation: crawling between the legs of the victors. Volunteer ornithologist Dr. JC Gonzales (kneeling, left) is not spared the disgrace. Photo by: Godfrey Jakosalem 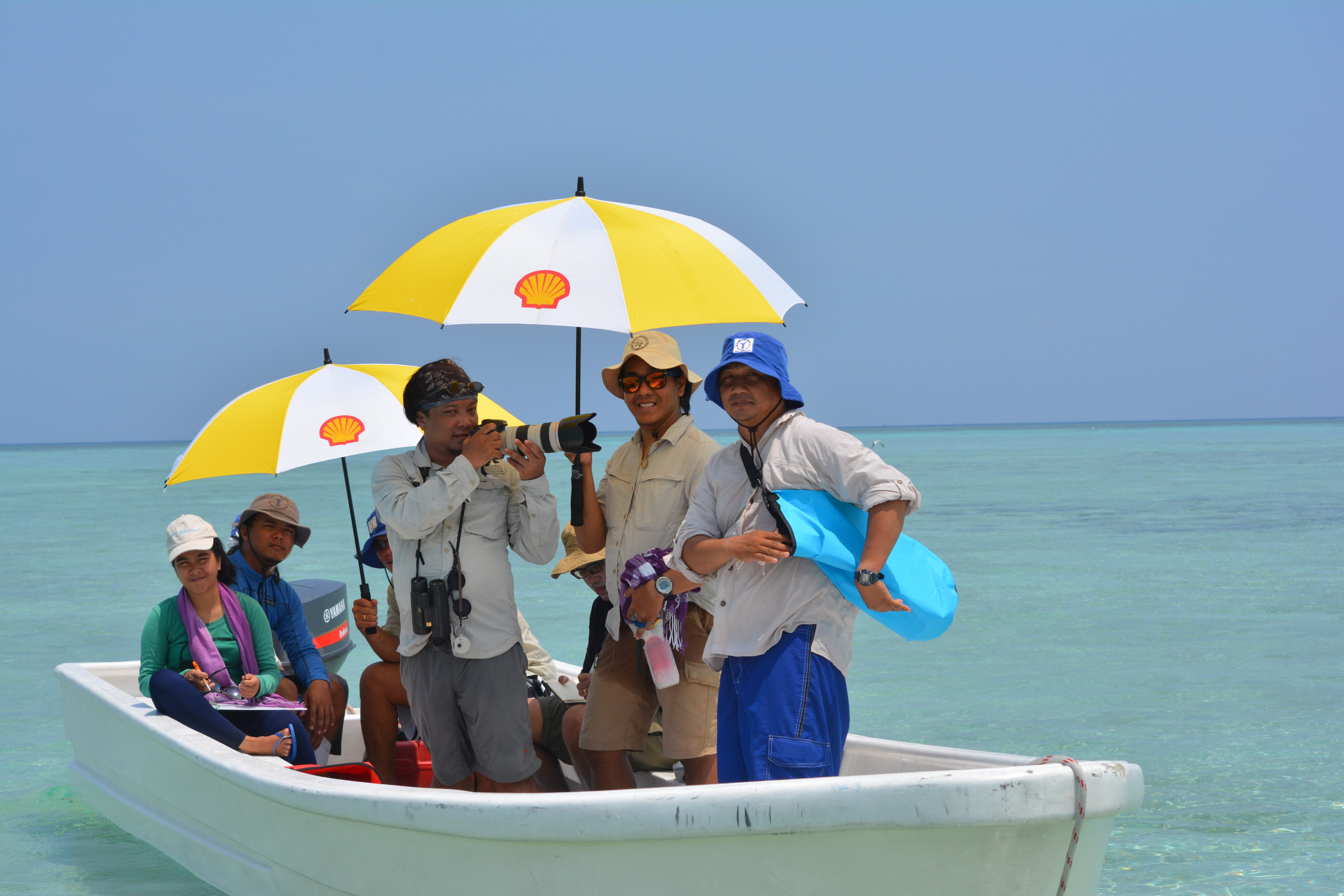 On the way to South Islet, 13 May. Jeric Dejucos (in blue), Gerlie Gedoria, Godfrey Jakosalem, Rowell Alarcon and Jeffrey David try to deflect the heat with the help of Shell. Hidden behind are Noel Bundal and Amado Bajarias, Jr. Photo by: Retchie Pagliawan 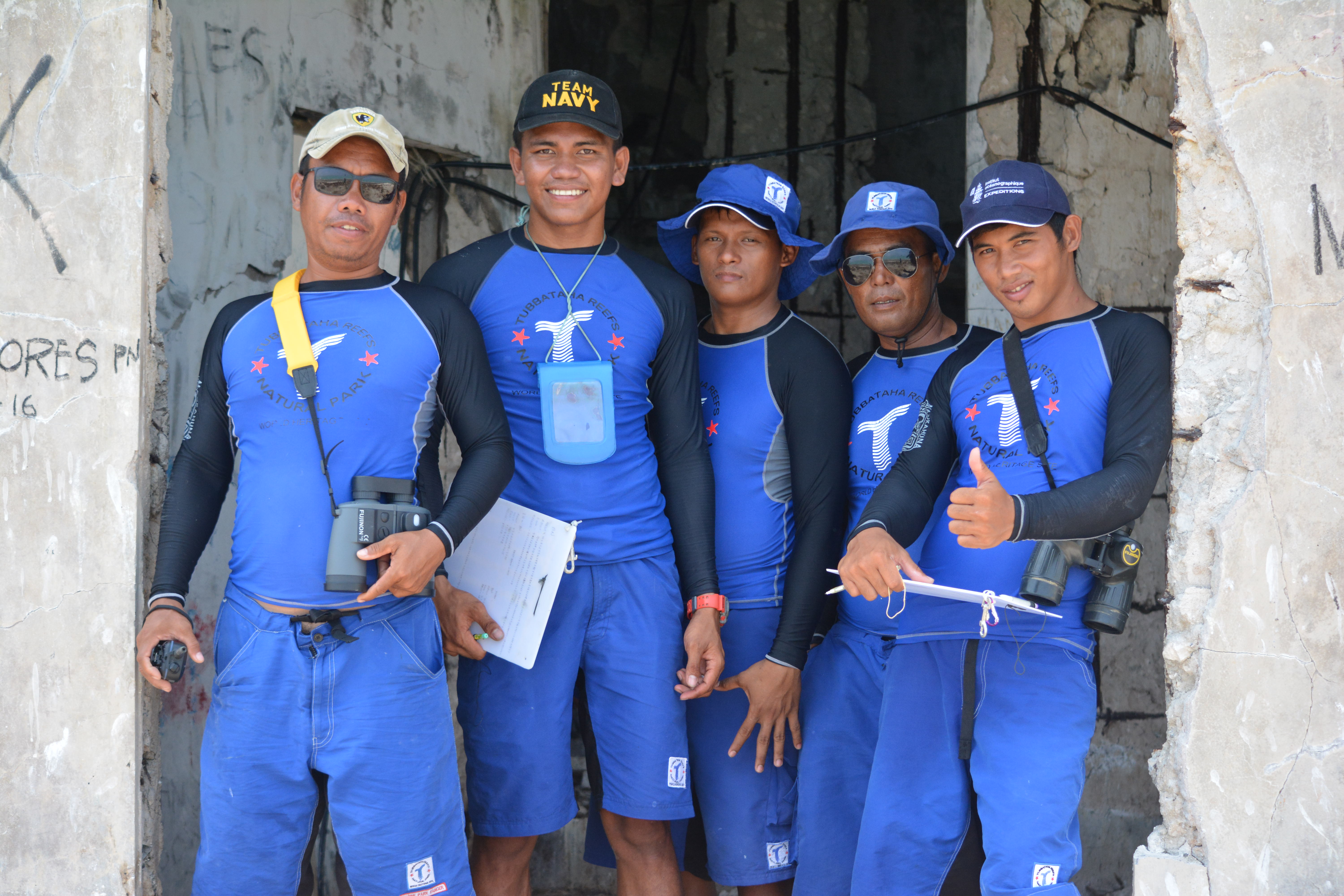 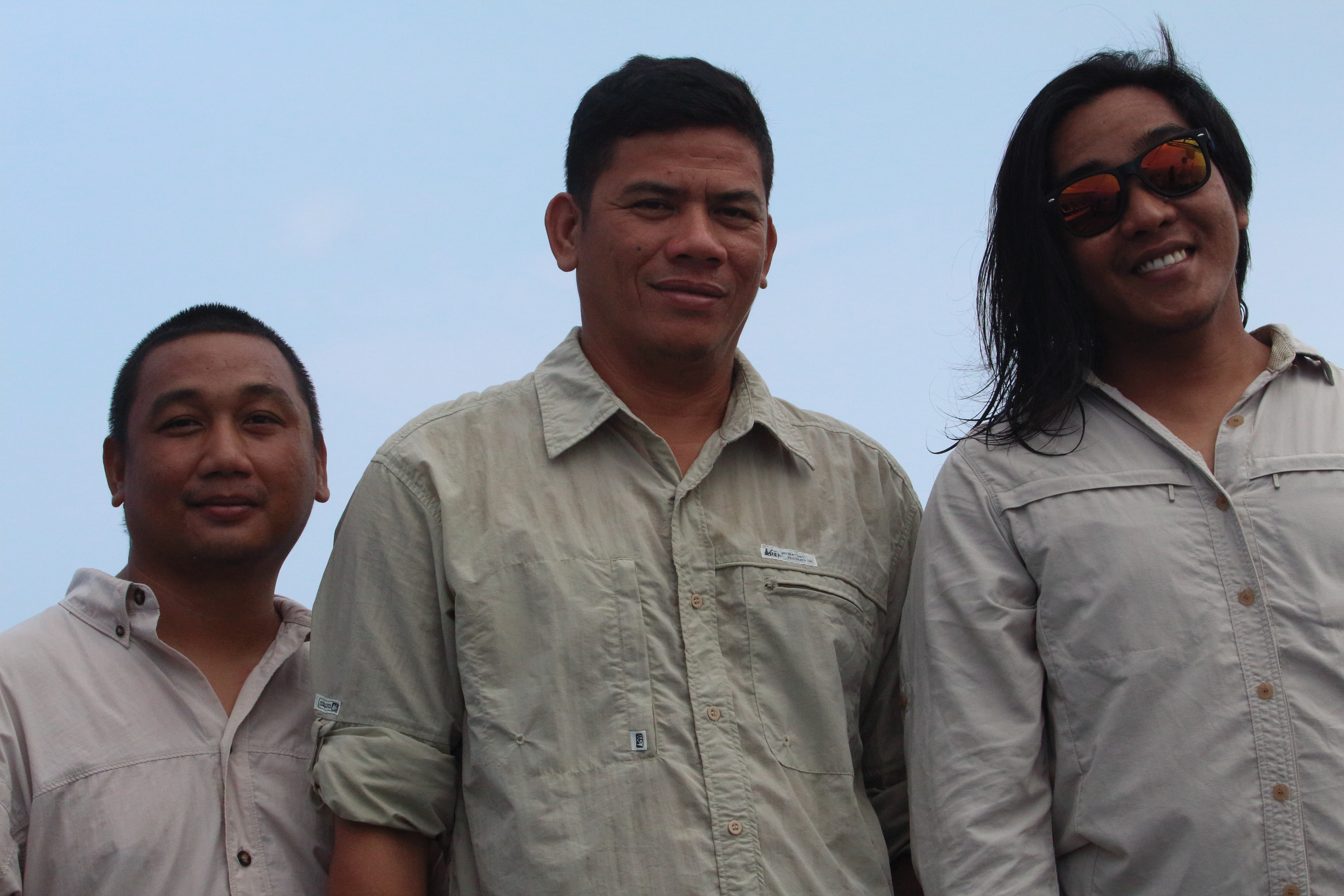 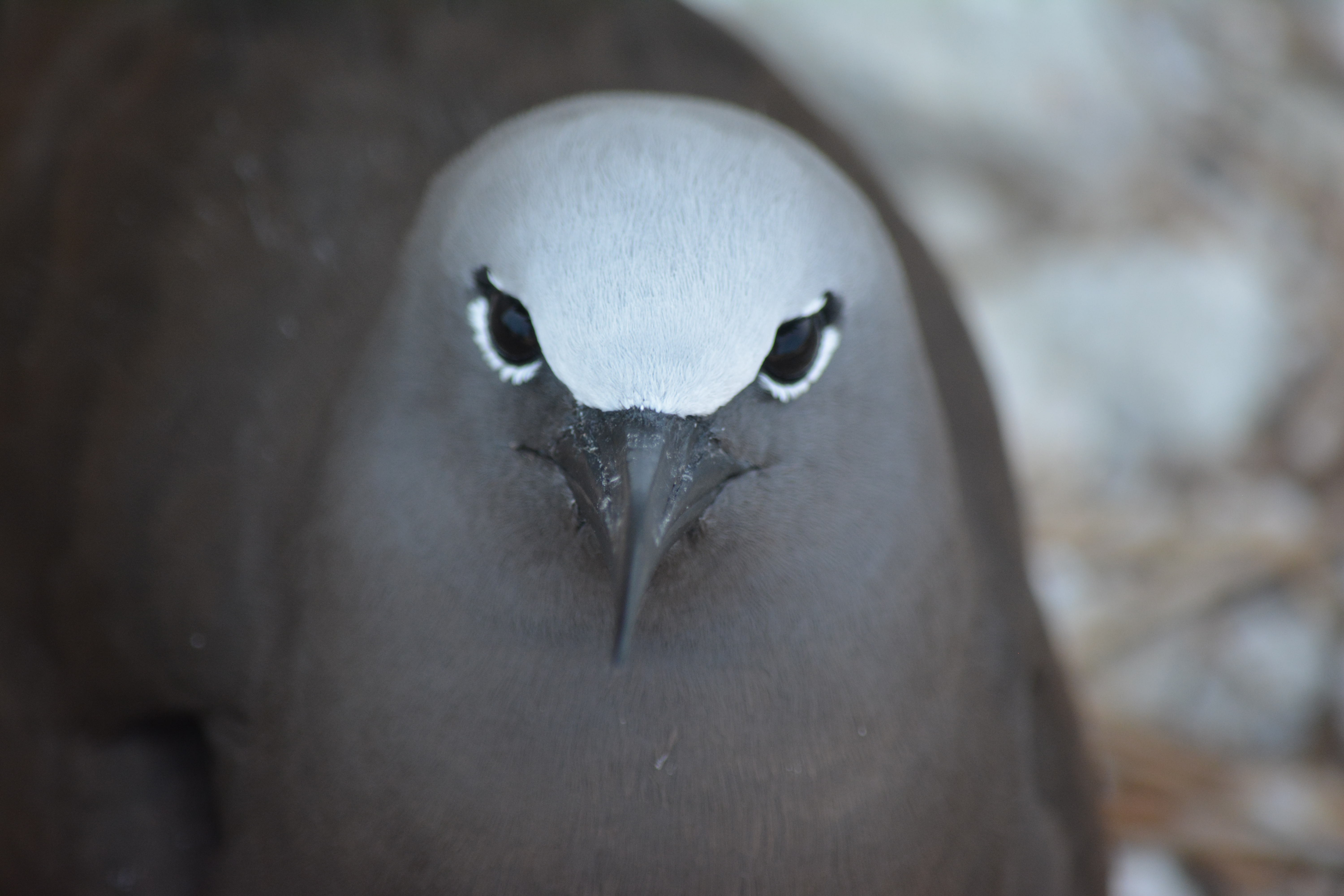 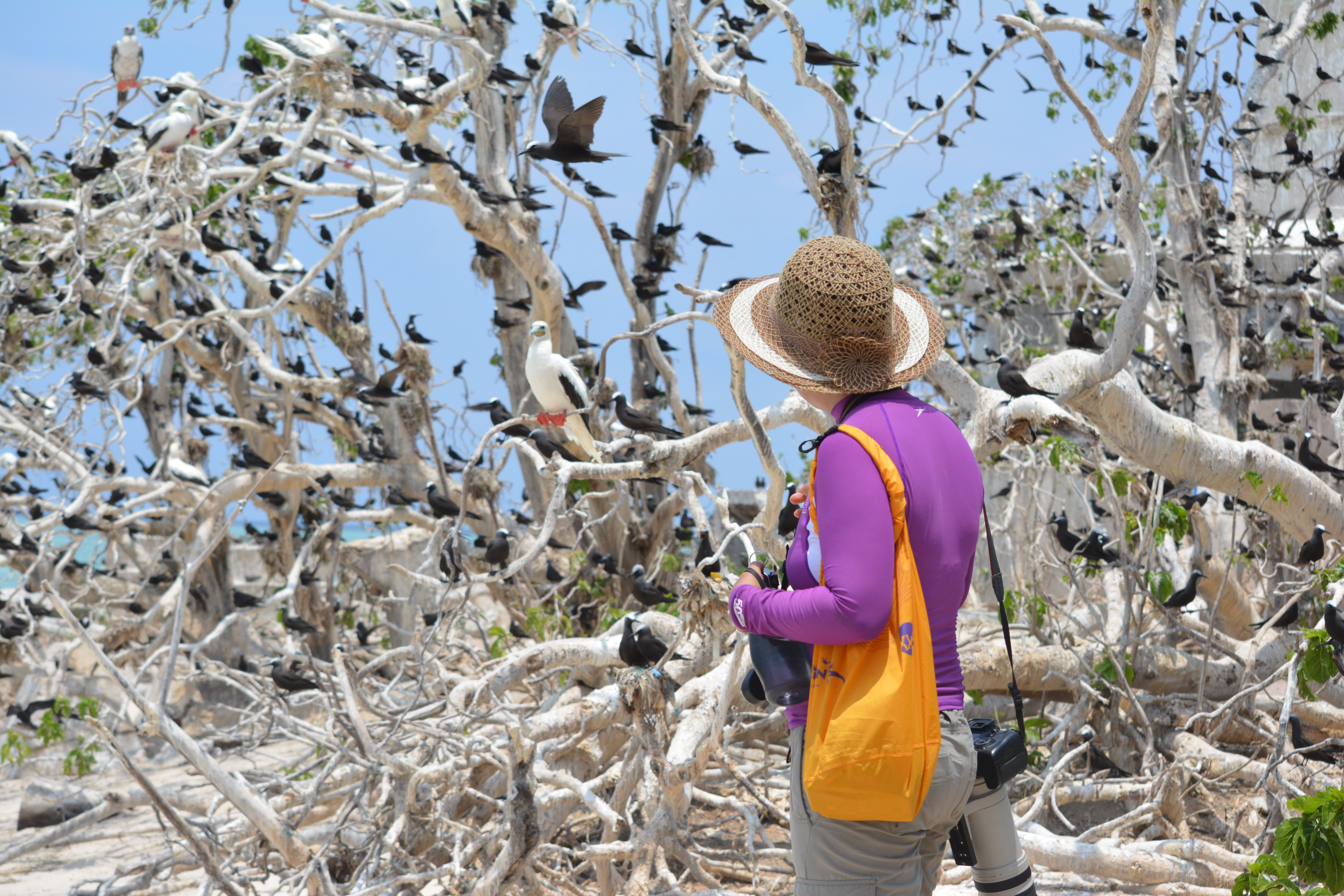 The once lush trees in the South Islet have mostly died due to overfertilization with guano from bird droppings. Nevertheless, almost 11,000 seabirds were found nesting in the islet. Volunteer ornithologist Lisa Paguntalan count black noddies, their nests, and chicks. Photo by: Retchie Pagliawan 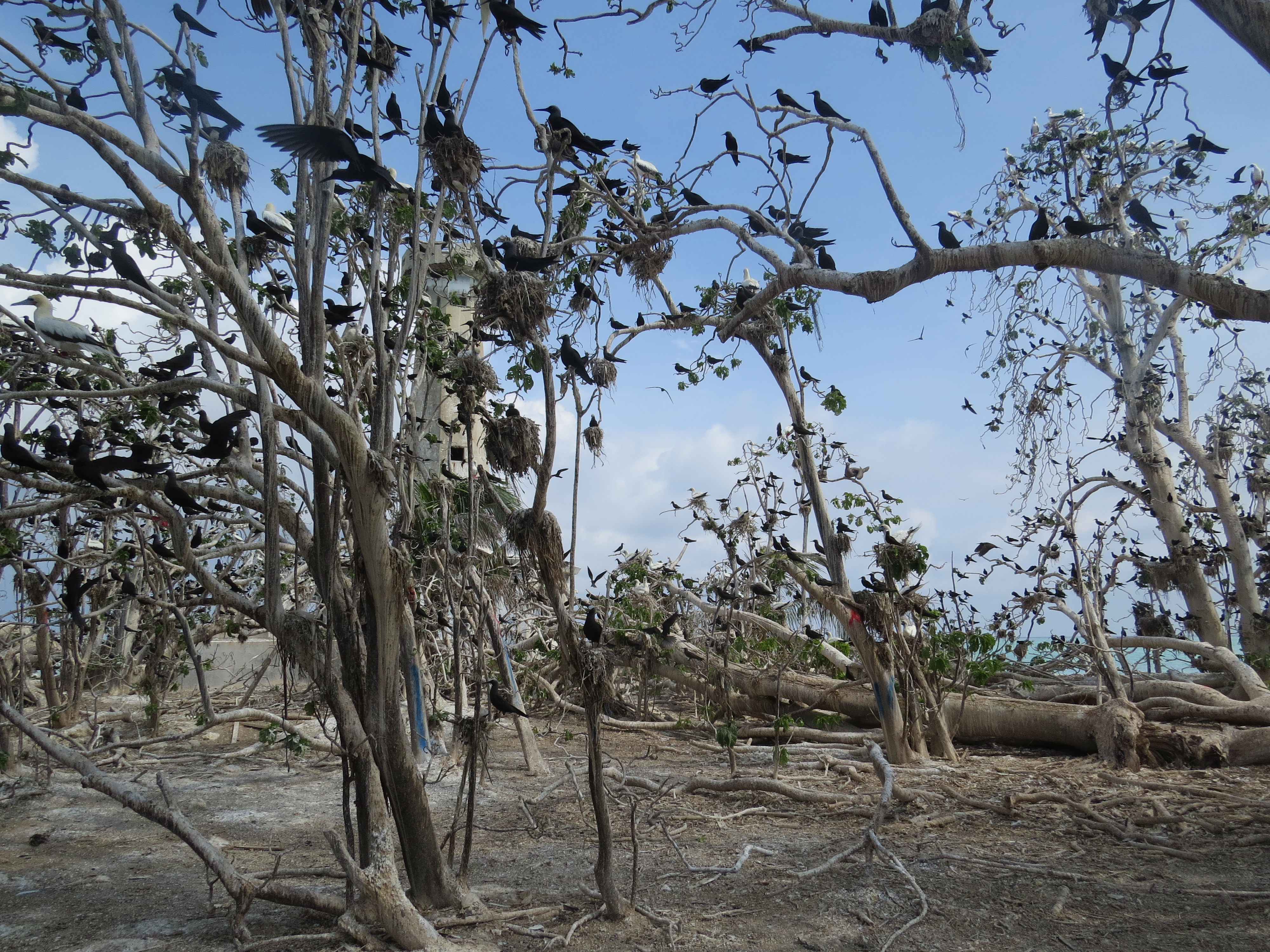 When just five years ago this area in the South Islet was canopied, now it is exposed the sun. Some trees have fallen. Devoid of nesting materials, black noddies (Anous minutus worcestrii) are experiencing a shortage of materials with which to build their nests. Photo by: Amado Bajarias, Jr. 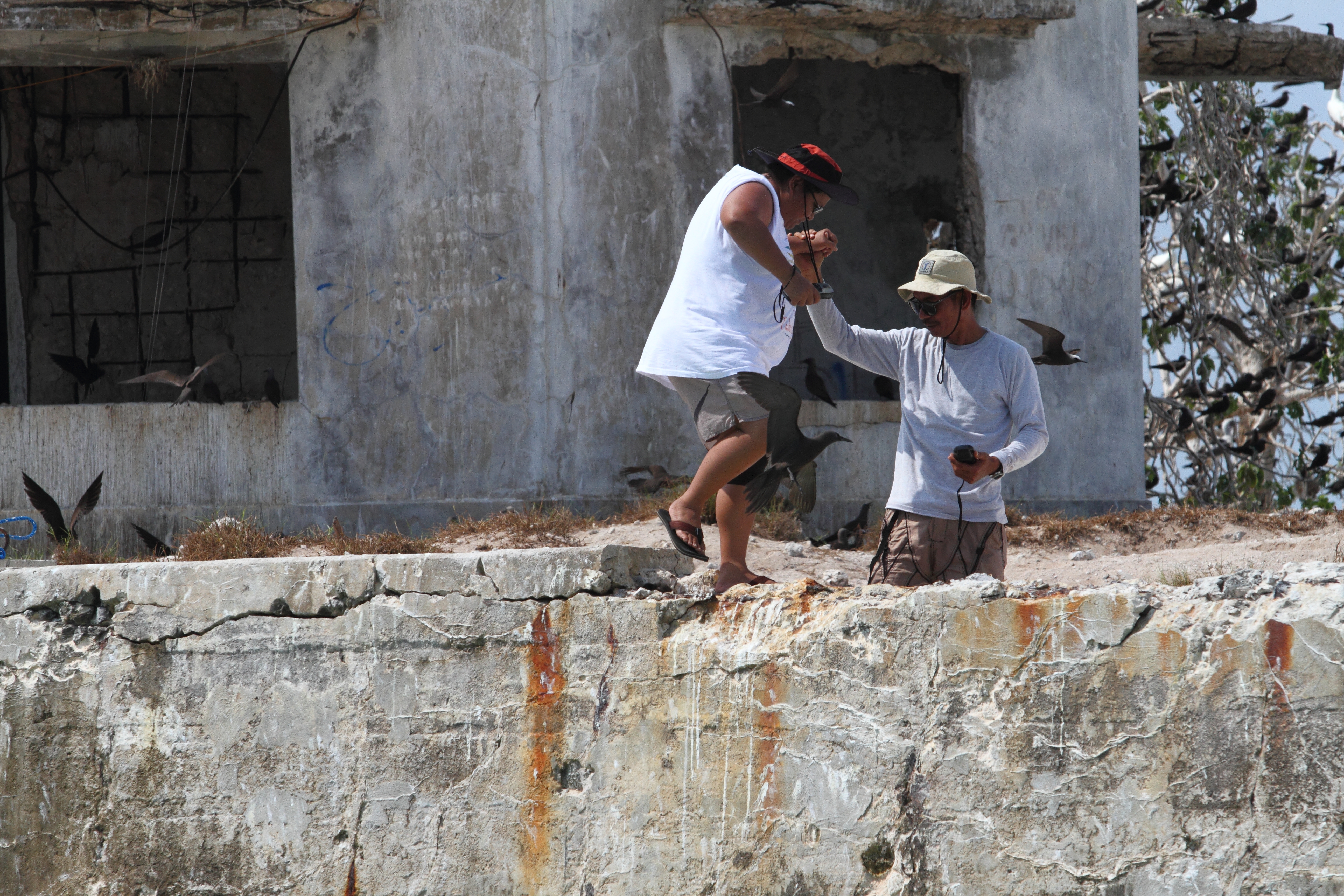 Dr. Teri Aquino, D.V.M., and M/V Navorca captain, Ronald de Roa, on a rare congenial moment. The two have been measuring the land area of both the South and North Islets for over a decade now but continue to fight over small things. Photo by: Godfrey Jakosalem 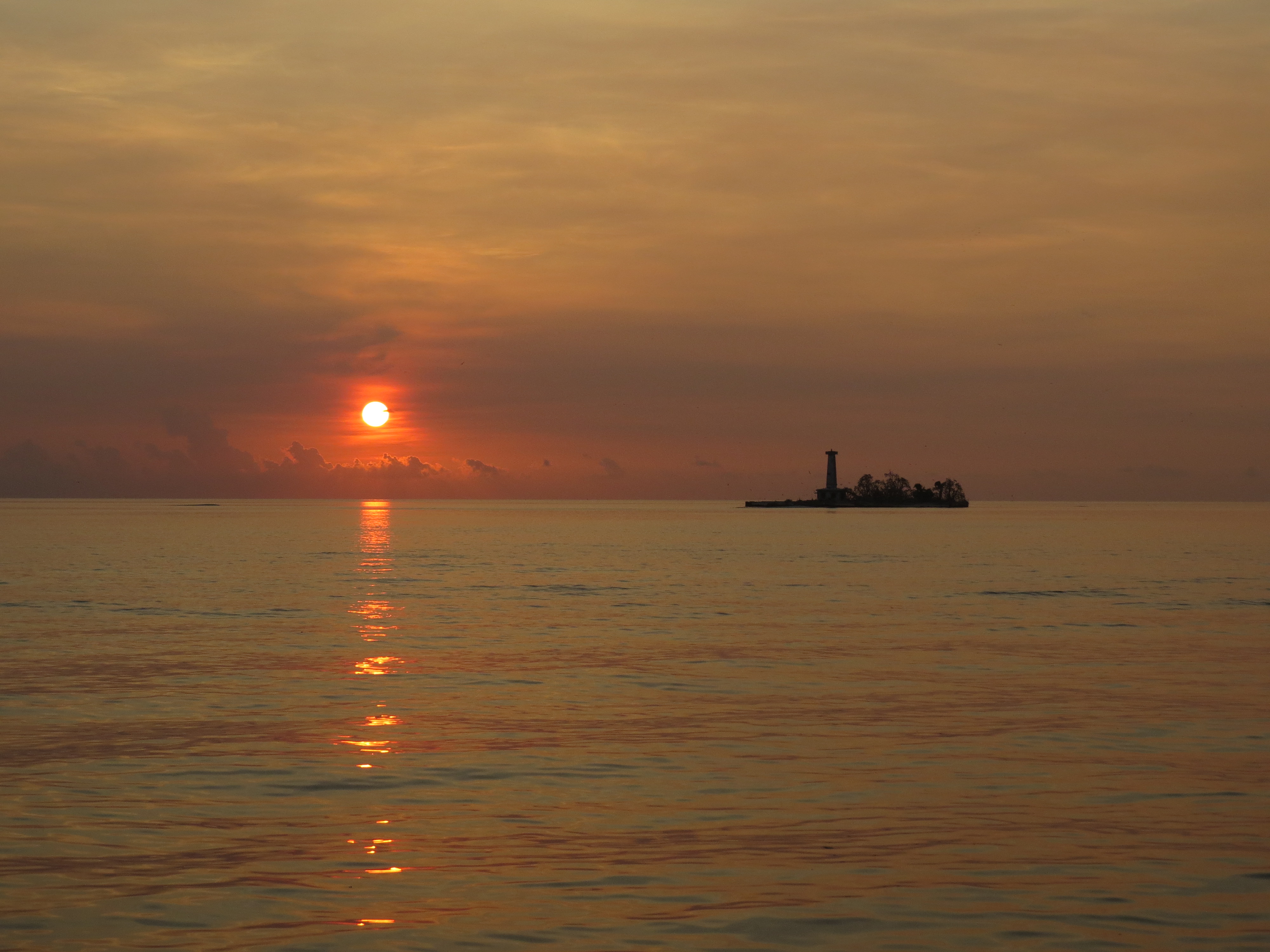 Early evening of 13 May, after completing the in-flight count of birds in the South Islet, unfolded one of the most beautiful sunsets to behold. Photo by: Amado Bajarias, Jr.